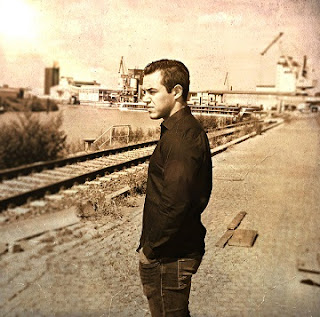 1.For those that have never heard of you before, can you tell us a little bit about the musical project?
1) Hi there! Dreamshift is a Black Metal Project that arose in my homestudio in Bavaria, Germany. I started it in April/May this year and wrote, recorded, mixed and mastered the first album „Seconds“ within 2 Month. It’s a very experimental project and I’m trying to combine many different influences.

2.You have an album coming out in October, how would you describe the musical sound that is presented on the recording?
2) It’s not this common black metal thing because there is much Dur-chords going on guitarwise. So, many friendly melodies are mixed up with hard blast beats and sorrowful screamed vocals. There are some aggressiv parts too of curse, otherwise it wouldn’t be black metal at all. I‘m trying to build up big atmospheric ambiences through much reverb and delay on the lead guitars. And I hope it kind of worked out!

3.What are some of the lyrical topics and subjects you explore with your music?
3) Thematically I tried to cover topics like the problems of getting older and not being able to fit this society, social criticism and some pretty personal themes. All in all it was all inspired by everyday life and my thoughts about it. What will be left when I‘m dead is the topic of the song „Remember“, the problem of always moving in a constant circle and not being able to go further is the topic of „Cricles“ and „Just Like Rain“ is about not wanting to be a party of this robotic life we live in sometimes just to show you some examples. I try to give the listener some space for own interpretation.

4.What is the meaning and inspiration behind the name 'Dreamshift'?
4) I came up with the name right after recording „Seconds“. It covered up the main topic of the album pretty good because many of the lyrics are written in the perspective human being that’s dreaming and some are like normal thoughts. So it’s a combination and sometimes you can’t decide what’s real and what’s not. So here you go. Sounds weird. It is.

5.With this project you record everything by yourself, are you open to working with other musicians or do you prefer to work solo?
5) I prefer to work solo I guess, so I can just do what ever I want. No one complains, no one wants to change something. And it’s a pretty cool feeling to finish an album you did all the way on your self. The only thing I would like to do is working together with a producer, so I could have some experiences from someone else helping me for the recording and mixing itself. That would be awesome. But it’s pretty expensive...

6.The album is coming out on 'STF Records', can you tell us a little bit more about this label?

6) STF is a label from Thüringen in Germany and it’s pretty close by where I live. We had a meeting and it was great, so I decided to work together with them. They aren’t a label that does provide metal only. And I think I am one of their most „underground genre“ client. But so far it’s pretty cool! They have a great Studio as well! Gary, the owner, is a great guy and a great musician! They all have so much experience in terms of music.

7.On a worldwide level how has the feedback been to your music by fans of black and post metal?
7) So far I only had great feedback and even better reviews for the album. Everything works out way better then I thought! People are messaging me on Facebook just to tell me how great my music is and that’s a huge honor! I‘m really glad people like it.

8.Are you also involved with any other bands or musical projects?
8) Yeah for sure! I’ve played drums in many deathcore- and deathmetalbands. I left those because of the lack of time I’m having. At this moment I have my second one man project running called „Nemus“ which sticks to a way more traditional style of atmospheric black metal. And as well I‘m starting a black metal project with some friends of mine in Bamberg in which I play guitar and sing. So always busy!

9.Where do you see yourself heading into as a musician in the future?
9) Music is my biggest love but always will stay a hobby I guess. I love black metal. And I don’t want to do more commercial music, so I won’t be able to live from it. But that’s ok! I have a normal daytime job and use all the time that is left to make music. For me I think that’s the best way to do it. But for sure there will be many many more albums I will record or be involved in!

10.What are some of the bands or musical styles that have had an influence on your music and also what are you listening to nowadays?
10) I listen to every genre. Wait, no Volksmusic. I don’t really like that shit.
I like to listen to every style of metal, but most of the time Black Metal. I like techno, deephouse, EDM, classic music, some jazz and funk, indie, alternative and of curse German Battlerap, that stuff is just hilarious! But at least 70% of the music that comes out of my speakers is Black Metal.
For my own music for Dreamshift especially I’ve even been influenced by Minimal Techno a little bit! There are these long lasting guitarparts and some Synthesizers that really remind of minimal leads. Some classic influences, as you can hear on the piano based speech called „everything“. By the way the piano which I recorded was the one in my wintergarden. It is totally out of tune. I learned playing on this thing 17 years ago. But I think it has a cool vibe going on!

11.What are some of your non musical interests?
11) I love to cook. Good food and health is important to me. I do some Fitnessstuff and hit the gym at least 4 times a week. I like to travel and to get god damn wasted in clubs, bars and on festivals. Could not live without that!

12.Before we wrap up this interview, do you have any final words or thoughts?
12) I would like to thank you for the questions of curse! And to those guys spending some time to read this: thanks for your time, I hope it wasn’t wasted, support your underground and your local scene! It depends on you if there will be more great music or not!

Posted by OccultBlackMetal at 9:55 AM