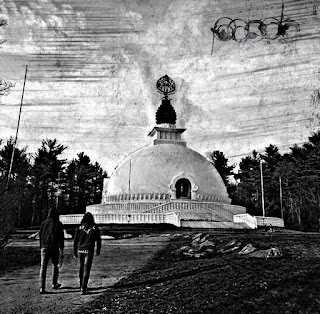 1.For those that have never heard of you before, can you tell us a little bit about the band?
mr. f: We play this game...it's called “guess what's in my pouch.” I hide a piece of candy corn, a battery, or another small loose object in my pouch. It's mr. bombastic's task to determine what object it is.
mr. b: it's always the rock cell phone.

2.How would you describe the musical sound that is presented on  the recordings?
mr. b: We wouldn't. We just play what we believe is this most accurate interpretation of what we are feeling or trying to convey. It's more about the process rather than the end product.

3.On the full length you had released in April the lyrics dealt with the slavery and oppression of the African American people of the last few centuries, can you tell us why you picked this topic for an album?
mr. b: It's a little complicated, but we're from western Mass and while it tends to be this “hush hush” thing, Massachusetts at one point had a lot of controversy revolving around their state schools and the mistreatment of their patients. We both work in the human services field, so human rights is something we deal with on a day to day basis and some of our clients we care for actually came from some of these places. There's a strange comparison between the way the African American slaves of the south and how the patients at these facilities were treated. It was all too coincidental that the time we released the album was the anniversary of the film “Titicut Follies,” which ultimately led to the closing of those schools, as well as the big blow-ups of U.S. Politics in regards to african american rights. The album focuses it's sound around concepts of human suffering and mental disability, which is why it sounds the way it does.

4.What is the meaning and inspiration behind the name 'Pando'?
mr. b: Pando is the oldest and heaviest living organism on the planet located in Utah. It's a whole forest of quaking aspen trees all connected by the same root system and it just resonated with us. Our friendship is closer to brotherhood; different trees, same roots.

5.Currently there are only 2 members in the band, are you open to expanding the line up or do you chose to remain a duo?
mr. b: I think the vast majority of the writing will always be between the two of us, but one of the most interesting things to us in our name is that it's a forest connected with many trees.

6.Since 2016 you have put out 4 releases, do you spend a great amount of time creating and writing Music?
mr. b: We both have lives outside of music and we only get together when we can, so we try to spend that time wisely.
mr. f: we each, independently, spend our time observing the ins and outs of daily life. These small things can transcend and transform into bigger things.

7.Currently you are unsigned, are you looking for a label or have received any interest?
mr. b: I've always been interested, but skeptical. I think we both enjoy the freedom of being able to put out anything we want, whenever we want and being able to control our own stuff. If a label existed that would allow us to operate the same way we have been, but distribute physical copies, I'd be on board.

8.On a worldwide level how has the feedback been to your music by fans of black metal, experimental and noise?
mr. b: We haven't had much feedback, really. Neither of us know what we are doing when it comes to promotion, nor do we really have the finances for it. But we also aren't really looking that hard. Our first album almost wasn't even a released thing and on top of all that, Massachusetts is mostly indie bands and stoner metal, it seems. There isn't much draw for our music here and for some reason, we seem more popular in Europe.

9.Where do you see the band heading into musically during the future?
mr. b: It's hard to say. We never plan anything, but we always have ideas. It's just a matter of which medium we decide to execute them.
mr. f: Combining various forms of art with our musical process seems like a practical next move.

10.What are some of the bands or musical styles that have had an influence on your music and also what are you listening to nowadays?
mr. b: A lot of NPR. I never listen to anything on the radio other than podcasts because United States pop music is shit and I don't have a ton of time during the week to go hunting for new music, so other than the kids wanting to play the new Lady Gaga or whatever the fuck they listen to, I'm stuck wanting to gouge my ears out while driving. Lately for me though, it's been this hip-hop artist Onra from France and with fall coming around, I'm breaking the folk-black metal out again via Agalloch and Summoning. I'm waiting patiently for the new Wolves in the Throne Room album and new Bell Witch. I've been listening to a lot of meditation music as well.
mr. f: Fletcher Tucker lately.

11.What are some of your non musical interests?
mr. b: I'm really into film, writing (mostly philosophy and sciences), and particularly interested in performative art.
mr. f: algebra.
mr. b: we've been debating whether or not this woman at CVS has a lower half to her body or not.

12.Before we wrap up this interview, do you have any final words or thoughts?
ac: get high and suck.

Posted by OccultBlackMetal at 10:08 PM