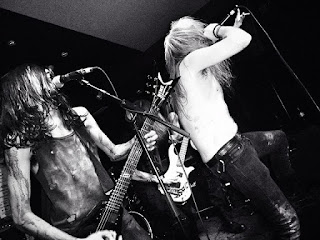 1.For those that have never heard of you before, can you tell us a little bit about the band?
The band formed when the two members of the band worked together in a previous project. We were dissatisfied, that band ceased to be and Ereskigal was born.

2.In May you had released an ep, how would you describe the musical sound that is presented on the recording?
A cacophony of savage, antinomian Black Metal.

3.The band has been around since 2012 but waited until 2017 to release any music, can you tell us a little bit more about the first 5 years?
The first year or so of the band was hampered by many line up changes and so was spent writing mostly. We played a single show and then went on hiatus. Myself and Azott decided the time was now right to resurrect it.


4.What are some of the lyrical topics and subjects the band explores with the music?
All of the songs are in one way or another based in anti-cosmic occultism. Some are corruptions of rituals I’ve used before, others are narrative explorations of humanity’s place in the cosmos and what lies beyond it. A reasonable starting point for research would be Gullveigarbok by Vexior, Book IV by Crowley or the Book of Sitra Achra by N.A-A.218. Those who know, will know. It matters not.


5. I know that the band was named after a Mesopotamian goddess, can you tell us a little bit more about your interest in this topic?
We chose the name because Ereskigal is a goddess associated with the underworld and more importantly with law-making and self sovereignty. We didn’t want to set out to make music like another band, the point of the project was to explore the darkness we want to create and set our own law. To create music as vicious, murderous and unyielding as we choose.

6.Currently there are only 2 members in the band, are you open to expanding the line up or do you prefer to remain a duo?
We’re in the process of creating a new live line-up, and still writing material as a duo. Time, as always, will tell.

7.Do you have any touring or show plans for the future?
Ereskigal has been beset with issues in this area since our inception. We’ve had offers for shows in 2017 in various places, but unfortunately none have yet come to fruition.

8.Where do you see the band heading into musically during the future?
Somewhere dark.

9.What are some of the bands or musical styles that have had an influence on your music and also what are you listening to nowadays?
Nightbringer, Acherontas, Misthyrming, Dissection, Svartidaudi, 1349 and Pseudogod were all large shared influences whilst writing ‘Sojourn’. Beyond that, we listen to an eclectic range of things. Both of us and the current live members are active in other bands in the UK underground but some leading lights who we do not share members with are Abduction, Wolvencrown, Trivax, Qrixkuor and Funeral Throne, to name a few.

10.How would you describe your views on Occultism?
Study is a lens to use understanding, or destroying, the many facets of reality. Read a book.

11.Before we wrap up this interview, do you have any final words or thoughts?
Rejoice, everything ends.

Posted by OccultBlackMetal at 1:49 PM