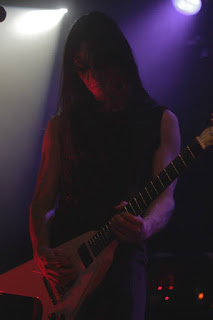 1.Can you give us an update on what has been going on with the musical project since the recording of the new ep?
I'm still working on the new album wich is almost finalised but, it will be released during 2018 maybe. And I started to work on the remastering of my first album "Cosmic Dream" for a futur re-edition.

2.You have a new ep coming out this month, how would you describe the musical sound that is presented on the recording and also how does it differ from the stuff you have released in the past?
The new ep is really different from my others works, is a parenthesis in the project. In this ep I use a lot of electronic sounds and less of symphonic stuff. The pieces are more ambient and atmospheric, more spatial.

3.This project started out as being more symphonic black metal but on this new recording you have evolved into more of an ambient black metal style, what was the decision behind going into this musical direction?
In fact, this ep was not scheduled at all. It started with a composition for a new project in a synth dungeon style, but during the composition, I added guitars and drums and I said to myself that could be a nice concept for Onirism. So I gave up the idea for a new project and I wrote some lyrics, the theme was found easily due to the musical direction taken.

4.What are some of the lyrical topics and subjects you explore with your newer music?
The lyrics in this ep, like with the other ep "The Well of Stars", are linked. This is a spatial journey through a cosmic universe, where we derivating slowly to a sun. It's about contemplation, loneliness and madness.

5.What is the meaning and inspiration behind the name 'Onirism'?
Onirism is about dreams, especially lucid dreams and all which relates to the dreams, which leaves me plenty of room for my imagination. I have choose "Onirism" because when you see it, you already know what this is about.

6.With this project you record everything by yourself but have experience playing in bands with full line up's, how would you compare the two?
These are both good experiences, in a band, you need to work in common with others musician for create something which match with everybody, you be part of something that you build together. And with a solo project, you are totally free, you can make what you want, only your imagination is your limit, nobody can tell you how you need to make your music. That is why I choose the theme of dreams with Onirism, I have lot of place for imagination and that leaves me the choices to explore what I want.

7.On a worldwide level how has the feedback been to your music by fans of black metal?
Generaly there are good feedback but some people are maybe deterred by the symphonic side, wich is a big part of my music and maybe it takes too much place for "traditional" black metal fans but, I understand that.

8.What is going on with some of the other bands or musical projects these days that you are a part of?
I had to leave the bands (Belenos, Hentgarm) because I live now in Quebec. But with my other project Catacombes, I would want to make shows, I already found some musicians, it remains for me to find a drummer and we will be ready.

9.Where do you see yourself heading into as a musician in the future?
I hope that I could still work on Onirism, this is the more important thing. And make shows with Catacombes or another band, but that is going to become more complicated in the future, I'm going to have less time to spend on music.

10.What are some of the bands or musical styles that have had an influence on your newer music and also what are you listening to nowadays?
I think movie and video game music have an important part in my influcences. For the bands I can say, Summoning, Dimmu Borgir, Bal Sagoth, Wintersun, Windir, Emperor. Recently, I listen more of atmospheric black metal, like Midnight Odissey, Mesarthim, and some others, you can also feel the influence of these bands in the new ep.

11.What are some of your non musical interests?
Music takes an very important part of my free time but when I want to clear my head and that I have nothing to do, well I play video games or I watch some movies, and I take care of my wife and my dog!

12.Before we wrap up this interview, do you have any final words or thoughts?
Thank you for letting me speak of my music, I would also like to say that a split will be revealed soon!

Posted by OccultBlackMetal at 4:30 PM