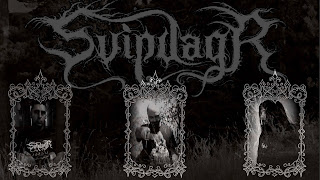 Svipdagr: This new album, "To Torment the Men" is something more raw and at the same time melodic than "Black Verses". The sound remains similar, very raw and dirty, but this time Funedëim after the mix has given a better touch getting the album to continue sounding raw and dirty, but with more power. There is also some evolution in the songs if compared to "Black Verses", the songs are more elaborate and studied.

3.This is your first album in 4 years, can you tell us a little bit more about what has been going on during that time span?


4.What are some of the lyrical topics and subjects the band explores with the newer music?

Svipdagr: The band, although in this case more specifically Funedëim seeks to talk about death, darkness, destruction, and all kinds of issues, which have little to do with being happy and be happy ha ha ha ha


5.What is the meaning and inspiration behind the name 'Svipdagr'?

Svipdagr: Svipdag, meaning Sudden Day; Old English: Svæfdæg [2]) is a legendary Viking hero with berserker fame appearing in the stories of Hrólfr Kraki in the saga Hrólfs saga kraka, and as main character in Grógaldr and Fjölsvinnsmál, both included in Svipdagsmál. 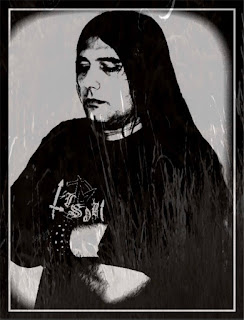 Svipdagr: No. The band in the beginning, we decided not to play live. Svipdagr has always been a study project mainly because of the distance between Funedëim, Thanatos and me, we are distancing 900 km.


8.On a worldwide level how has the feedback been to your music by fans of black metal?

Svipdagr: We have never had a great legacy of followers, which is true, is that there are people who follow us from our beginnings and we thank you very much. In our opinion, we believe that with our new album "To Torment the Men" will get more people to notice our music, at least we hope.


9.What is going on with some of the other bands or musical projects these days that some of the band members are a part of?

Svipdagr: We each have recent things with our other bands. For example Thanatos with CAULDRON have just released their new album "Regnum Phobos" and are performing shows for this new album. Funedëim, for his part, is working on the next BIZARRE album, he also does the same with DISGOB, and recently finished his collaboration work in MACHU LANÚ. On the other hand, Volundr with ITNUVETH is about to publish his fourth work "Tales and Legends of Wolves". In this band, also participates Funedëim like singer of the band, which has been three years together with Volundr in the band.

Svipdagr: In the future, we intend to continue to evolve with our music without putting on any musical barriers. The only thing that we have in mind is to continue with our raw and dirty sound.


11.What are some of the bands or musical styles that have had an influence on your newer music and also what are you listening to nowadays?

Svipdagr: We are influenced by the 90s of Norway, bands like the old SATYRICON, IMMORTAL, CARPHATIAN FOREST, EMPEROR, the earliest ENSLAVED, PRIMORDIAL, MAYHEM, BURZUM, etc, and to all this we impregnate our music with dark melodies.


12.Does Occultism play any role in your music?

Svipdagr: Occultism may have a role in our music, it is possible, but no more than darkness, anger, despair or hatred, may have some importance, but in conjunction with the rest.

Svipdagr: Well, we wanted to thank you for giving us the opportunity of this interview and reaching out to more people. Tell our foreign fans that if they want to see our page they can go to https://www.facebook.com/2000svipdagr/. You can also write us a private message on this page and if you need a copy of our new album "To Torment the Men", and we will be delighted 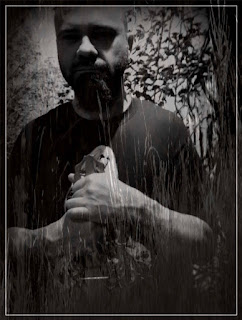 Posted by OccultBlackMetal at 5:09 PM