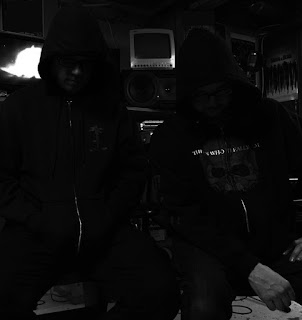 The band started when Malum and I recorded a song on a four track wth a drum machine for a compilation that was coming out. Although we were in other bands, we loved black and death metal and wanted to take it further. We hooked up with some other musicians and recorded a demo CD in 2001 called American Evil. In 2002 we took a hiatus due to everyone's commitments with their main projects. In our down time Malum and I would occasionally write a song here or there. In 2015, we decided to finish a few of the songs. Envied and Pig Digger were the result of those sessions. The songs turned out better than we expected and we rolled on with the creativity. We released the songs on our Bandcamp page and Redefining Darkness contacted us to say they liked the songs. It took some time to record but by mid 2017 the record was finished. I recorded and mixed it in my home studio. The two of us played all the instruments alone. Which leads us up to now.

2.In September you have a full length coming out, how would you describe the musical sound that is presented on the recording?

The release is titled Envied. The music is black metal with a little rock n' roll vibe.  Although we have a "sound" we believe that each song is different. We used a mix of tempos and writing styles to keep it from being stale or repetitive. It wasn't a conscious decision in any way. We just let it go and wrote what we wanted like we always do. We adhere to no formula or genre expectations. We are extremely happy with the end result. I also should mention the awesome cover art by Misanthropic-art. Custom drawn for us from ideas we gave him.

3.The band broke up in 2002 but got back together in 2016, what was the cause of the split and also the decision to reform?

Although things were going great and we loved being a band, commitments with our main bands kept us from going on. The band I was in was hitting it hard and it was just too hard to get together regularly. Malum and I decided to start again because the songs we were coming up with were very inspiring to us. The vibe was amazing and it was flowing out of us. Most nights we got together we would write and record basically a whole song.

A good deal of the lyrics have to do with our belief that gods were just men. People using power and persuasion to gain control over others. The use of fear in religion. It's interesting to me that people believe that they know what happens after you die. There are just so many theories on that. Living your life following an ancient set of rules and stories is just nonsense to me at this point. It seems likely that there is nothing beyond this life. On the other hand, having faith in something can be a good thing for others but let's face it, no one really knows where you go in the end.

5.What is the meaning and inspiration behind the name 'Nailblack'?

The name Nailblack came to me randomly. It sounded good, and we just liked it. It's a made up word so we knew no one else could have the same name. That was important to us seeing that so many bands are called the same thing. I think the name Nailblack fits our sound and vision perfectly.

We have only played 1 show ever and that was in 2001 in our home town. It went well and we got a great response. As far as our stage performance, it was just us being ourselves and letting loose our rage and fury. Head to toe black of course!

7.Do you have any touring or show plans once the new album is released?

We are working on a live lineup as we speak. Malum and I will be doing the guitars/vocals, and a couple guys from our scene will play bass and drums for us. We hope to be playing live by November. Touring at this point would be hard because of our personal lives and family situations. We would however love to make appearances at metal festivals to help spread our music and word when we can. If the right touring opportunity does come along it would be something that we would talk about then.

The feedback so far has been great. We are connecting with people around the world through our social media and music sites and selling our merch all over. With the help of our label partnership, we hope to spread our music as far as we can obviously. It's a great feeling hearing from fans abroad. Inspiring.

9.What is going on with some of the other bands or musical  projects these days that some of the band members are a part of?

Both of us have been involved in some really solid bands and projects through the years. None of them have been black metal. We have done tours, had record deals and lived and breathed music from our teenage years on. With this project we aren't using any kind of "featuring members of" press to persuade people to check us out. We look at Nailblack as a fresh start and want to be thought of as a new band. Our musical past and current projects are out there for people who are interested in researching that on their own.

We plan on taking our sound to the next level in every way. We have a vision, but it has nothing to do with over thinking things. Just go with the flow and write what we feel at that time. There will be no drastic changes that I can imagine as of right now though. Exploring different tempos and creating dark atmosphere is what's on my mind currently. We have already started writing for our next release.

We love various styles of music from metal and rock to just random genres. With Nailblack the bands that come to mind are the usual suspects. Black, death, and thrash metal bands that most anyone reading this likes. From all over the world. New and old. Personally right now I'm loving music from Archgoat, Incantation, Toxic Holocaust and Midnight to name just a few.

Golf, friends and family, tattoos, beer, vinyl records.... I guess that's about it!

Nailblack thanks you for the interview. It's actually our first one ever. Check out our newest release "Envied" out September 29th on Redefining Darkness records, and connect with us on our social media sites. We love hearing from you! Hail Dirty Black Metal.

Nailblackmetal@gmail.com
Posted by OccultBlackMetal at 8:50 PM