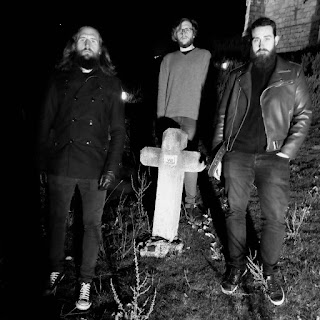 We are a band from Madrid (Spain), and practice a raw kind of black metal since 2014. We have three works in different ways, but always with the intention of honour the sound and spirit of our favourites bands of the genre. Our last album, Death to All, was release this year, and we are proud with the reaction of people around the metal scene.

Basic music adorned with some thrash riffs, overwhelming rhythmic base and howls from an infernal throat!We want to respect the primitive punk sound of black metal, and to introduce some variations of different kinds of metal.

With Witchcult we show our passion to the witchcraft histories, medieval covens, and the figure of woman like the center of existence. In Death to All, the cult of death of ancient civilizations, and the fear of waste were the main inspirations.


4.I know that the band was named after am female demon from Mesopotamian Mythology, how does this name fit in with the musical style you play?

A perfect name to us! Something old, something threatening, evil and fear of an ancient culture and the female image as the center of life and death.


5.What are some of the best shows that the band has played so far and also how would you describe your stage performance?

Believe or not, we don't play live shows!!!We prefer to deform our sound and lyrics in the stillness of our houses.

No concert on the horizon!


7.'Heathen Tribes' are re-issuing your current album, how did you get in contact with this label?

Heathen Tribes contacted us, and we replied "of course" in about two minutes!!!The label works with amazing bands, they treated us with exquisite respect and their releases are great!The place to be.


8.On a worldwide level how has the feedback been to your music by fansof black metal?
We are so surprised and flattered with reaction to our works!Only words of gratitude in this point.


9.Where do you see the band heading into musically during the future?

Doing exactly the same! Our music is an extension of us and we are the same three insane brothers that started this journey some years ago.

10.What are some of the bands or musical styles that have had an
influence on your music and also what are you listening to nowadays?

We would not exist without classics bands of black metal: Mayhem and Darkthrone. We must add Satyricon and Watain to the equation and you have the answer! Without doubt, the band of the summer to us is Dead Lord since we attend to their last show in Madrid.


11.What role does Occultism play in your music?

A privileged  place. We use a methaporical interpretation of reality through occultism, to express our ideas about life, about suffering and about death.

Posted by OccultBlackMetal at 11:43 AM