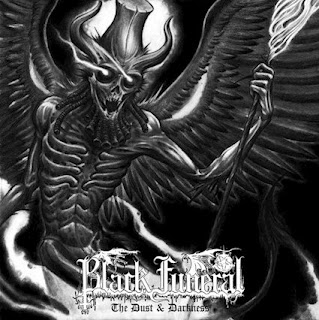 On  this  recording  Black  Funeral  goes  back  to  more  of  a  rawer  style  of  black  metal  while  moving  away  from  the  industrial  and  ambient  influences  of  previous  releases  while  also  mixing  in  more  tribal  and  shamanistic  style  drums,  the  production  sounds  very  dark  and  raw  while  the  lyrics  cover  the  vampyric  sonic  ritual  of  the  Hittite,  Hurrian,  Canaanite  and  ancient  Syrian  underworld  offerings  and  necromancy.

http://soundcloud.com/iron-bonehead-productions/black-funeral-dankuis-daganzipas-dark-earth/s-S5iiG
Posted by OccultBlackMetal at 3:47 PM