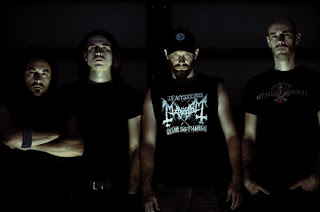 The band formed out of the ashes of a lame rock covers band I was in with the drummer. I grew increasingly tired of playing Pearl Jam and REM covers just to get a gig at the few places in Amsterdam where you can still play live music. We had a prima donna lead guitarist who was totally unreliable and once he left we decided to start playing black metal. It's the music I've been consistently listening to since my teens anyway. The replacement guitarist we were talking to for the rock band decided to give it a go and I knew our bass player via a mutual friend and liked the way he played. I wrote a handful of songs and over the next few months we crafted them into the songs you can hear on the EP.

2. So far you have released an ep, can you tell us a little bit more about the musical style that you worked with on this recording?

I had to take into account he fact that my bandmates have all been to music school and wanted to do something more intricate and creative than just aping the brutality of established bands. When it comes to musical training I'm the weak link in the band, which makes writing songs that will keep them interested somewhat challenging. When writing music I generally pursue atmosphere and a deeply melancholic melody. I didn't want any palm muting on the guitar riffs to avoid a 'thrash' sound. I took a risk in the sense that I wanted the riffs to be 'catchy', if they would stick in my head and if my girlfriend (who hates metal) would be singing them after hearing me play them then I'd be satisfied that I had something of sufficient quality. I wrote all the guitar parts on an acoustic guitar which I think gives you an emphasis on the melody - you can add the heaviness later. I am a limited guitar player so there is nothing too technical. The ending of the title track is an example of this - I wrote that riff for the rock band but I always knew it would make a wonderfully mournful black metal riff.

The EP was produced by Abraham Sarache, a prog rock musician who lives here and was my singing teacher for a while. He really crafted a defined sound for us. I played all the rhythm guitar parts and we used a vintage tube effect for atmosphere and a Line 6 modern metal distortion underpinning that for power. I also made a point of clearly enunciating all the words, which I believe is pretty original in this genre.

3.You lyrics cover a Utopian society built on Satanic Principles, can you tell us a little bit more about your interest in Satanism or Occultism?

I studied philosophy and political science at university and I am really rather worried about the way the world is heading at the moment. The 'Civitas Diaboli' is a call-to-arms for a society based on reason, wisdom and knowledge. I am by no means a LaVeyan Satanist but I like the stratification that Peter Gilmour has discussed and I feel that the current indulgence of the worst impulses of the masses in some developed countries is utterly revolting. I'm British and during the Brexit debacle we had a government minister declare that the British people 'have had enough of experts'. Well now we are pursuing a direction that risks great damage to the country so we indulge the xenophobia and ignorance of the uneducated. I had to disengage from social media recently as I couldn't deal with idiots who struggle with basic grammar overruling experts on global trade. The misanthropy I feel as a Satanist has been driven into overdrive by such events. Despite this I did want to present a positive vision in the EP, rather than just rant at the masses. I'd generally say that my Satanism is more philosophical than spiritual but for me the line between the two can be blurry. I am very private regarding my beliefs, after all it's hard to justify complaining about Christian evangelism if we are constantly proselytizing our objections to their creed. Let them bleat like the sheep that they are. My beliefs are for myself and my music.

4.What is the meaning and inspiration behind the name 'Era Distolas'?

If you're a cynic you might say that Distolas is one of the only remaining obscure demons whose name has not yet claimed by a metal band. If you're not you might assume that the band's leader is well versed in medieval demonology.

It's a take on the cover of an edition of The Revolt of the Angels by Anatole France.

6. Has the band had any opportunity to play an live shows and also are there any gigs planned for the future?

Amsterdam is a great city to live in, but is far from ideal from the perspective of performing any sort of metal music. Despite the reputation for rebellion here this City is as mainstream as it gets. We're talking with a few venues about performing. Halloween in a cellar club on the canals is a realistic option. The Dutch bible belt is where the scene is and I'm busy promoting the band to the venues there. (Well, as busy as one can be with a 7 month old baby at home). I am keen to play in France, Belgium and Germany.

7. Currently you are unsigned, are you looking for a label or have received any interest?

I have discussed it with a few labels. I have an album written and we are able to craft a polished sound on a low budget which is appealing to labels. We cannot bring thousands of social media followers to a label to negate the need for them to actually do any promotion, however. Reviews from sites such as this really help. I believe that our music can be profitable. I have worked in sales for years and I think I can sell this band.

A friend of mine is a bigshot producer in Scotland who has worked with some big name rock bands. He's remixing our EP to give us an alternative mix of the tracks. This isn't because we are unhappy with the current mix, but this guy has an impressive CV and I am keen to see what he can do with it. I'd love to give his name but he doesn't want his good name to be associated with an unsigned black metal band!

I've sent it to people in the UK, Russia and the US and the response has been enthusiastic. It's pleasing to see people listening to it in different countries in Spotify. After the review on this site we got a nice boost in a few different places.

9. When can we expect a full length and also where do you see yourself heading into as a musician in the future?

I have 3 new tracks written and am keen to record an album. Our bassist is off to South America for 3 months this autumn which makes things challenging but our producer is replacing him temporarily. The first challenge is to find time to record an album and find a label to support us. The other guys work and I stay home with my baby daughter most of the working week. Hardly ideal.

The bands that have influenced me the most would probably be Watain, Belphegor, Funeral Mist and Deathspell Omega. Outside of black metal I like darker classical music; Mussorgsky for example. I come from the town in the UK where Edward Elgar lived and I love his cello concerto. It's in E minor like most great metal songs! The band's lead guitarist has a jazz background. You can hear that in his playing.

Recently I have been listening to some French black metal like Aosoth and Arkhan Infaustus.

I play a lot of sport. I used to be a cycle racer at an elite level and I have been playing rugby for the last few years. My team just won the Dutch championship.

I am deeply embarrassed by the links between some black metal bands and Nazism, nationalism and fascism. It's moronic. As well as being utterly vile, these movements are always bound up in religious and social conservatism and black metal musicians and fans would very quickly find themselves being persecuted under such regimes. The Nazis burned books and banned music. If you play black metal and support such policies you're a cretin. It makes no sense to me, but I am glad we live in a free society where people can speak out and make themselves look unpleasant and ignorant.


https://www.facebook.com/eradistolas/
Posted by OccultBlackMetal at 5:25 PM