1.Can you give us an update on what has been going on with the musical project since the recording and release of the new album?
The important thing that happened was the relocation that is made at the end of 2019. when I moved to Belgrade, and in this transition period, which is still ongoing, unfortunately not much has been done. The change and the relocation was needed to improve the functioning of the band. From now on, the band will work in Belgrade. And the work on a new release will start soon and the official announce will be out.
2.Recently you have released a new album, musically how does it differ from the stuff you have released in the past?
Well, musically, not much. From other hand, the progress is visible, or hear-able. Fans definitely can notice the difference, but generally, some characteristic sound of Angelgoat exists, which always will be present, and won't change a bit in the future. When it's about the new album, definitely it's the most complete album so far. That pattern will be kept on future recordings, and also you definitely know what to expect. Concerning the all recording, the first album will always have a special meaning to me...

3.Most of your lyrics cover Satanic and Luciferian themes, can you tell us a little bit more about your interest in the dark arts?
Yes, mostly Satanic / Luciferian, but the lyrics are of much wider themes such as occultism, blasphemy, desecration, anti-christianity of course, perversion, death... My first interests into dark arts, and enlightenment, came after the reading a few books of Aleister Crowley. Even today I find him the one of the most genius minds ever.  But the lyrics of Angelgoat are written under no influences of any writer.
When it's about that some belief, I always considered it as a sort of individual inner thing. Mine is expressed through these lyrics.

4.From 2008 to 2015 the project was no longer active, what was the decision behind resurrecting the musical project?
In 2008. the band was put on-hold. Leaving of drummer Occultum Malleus, the longer recovery after the accident later, in which I almost become one with death, also some private problems, caused the absence from the scene.  No matter the band's inactivity, I was active and a lot of 'new' material is made through those years. For Angelgoat, and also some material from a side... The worship continues.

5.What is the meaning and inspiration behind the name 'Angelgoat'?
'Angelgoat' is a synonym for Satan. Although, on demo cover from 2005., it's actually an image of Samael. Name came up from the vision, in which I saw the name and image of it. I made a skeleton of logo through my remembrance, and Christophe Szpajdel gave it the final form. It's an ultimate name, and presents the vision in full darkness for 666%

6.Can you tell us a little bit more about the artwork that is presented on the new album cover?
The cover photo was picked from the last band's photo session made in 2019., as the most adequate image for the new album's cover. It's taken on the old German cemetery in my home town Vrbas. From  the very beginning and creating releases, I find the photography the best solution for the front cover. More realistic and simply more serious, then any drawing. The front cover and the complete booklet is made by my 2 close friends and supporters of band through the years. The evil cooperation will be continued in the future as well. Thanks and hail to Ratko Bjeletic and Inomatanas.

7.With this project you record everything by yourself but also have experience working with other musicians, do you prefer to work solo?
From the very start, the vision of Angelgoat was to be a full line-up band. But the lack of adequate musicians, the Devil-worshiping musicians, resulted that the newer releases I had to record everything my self.  The similar was as in the beginning. The smaller but dedicated lineup, always better, even if I have to record everything myself. One of the worthy is the brother Nekro from Goat Terrorism, and the long agreed pact has finally accomplished as the guest vocal appearance on the new album. Definitely there's intention to be a full line-up band again in the future.
Speaking of witch, besides Angelgoat, I took a guitar duties for a short period in the Black/Speed/Trash Metal band called Catastrophy.

8.In the past you also took this musical project to the live stage, would you also be open to the idea again in the future?
Yes. Actually there was just one show, unfortunately, in Novi Sad, Serbia, in 2007., the gig Belgrade was canceled... Even the mini tour was in plan, but eventually, nothing happen, cause band was put on-hold. Intentions for live performing exists, as it always has been, and I really hope you'll see the Angelgoat on stage again soon.

9.On a worldwide level how has the reaction to been to your music by fans of black metal?
The idea was to create the sound of the late '80s / early '90s, the music I grew up with. Some minimalistic primitive raw old-school Black Metal. Such sound makes a quite positive reactions at the older fans, bringing them back in that time. Which makes a really nice feeling to me. Also I'm aware that I'm going out with something old, nothing new, definitely non-trendy, and of course there must be some negative reactions, as well. But in a smaller measure. So it's nothing new. Just creating the music I worship, no matter the trends and shits. Although I like to hear the reactions, they don't have much influence on me.

10.Where do you see yourself heading into musically during the future?
Musically, the same as in 2001. The sound of Angelgoat is defined back then and there won't be any musical changes. Evolving a bit, through the time, but not essentially. The newer material is maybe a bit more Black/Death Metal... And definitely I won't stop until I record everything I composed in the past years, and the most likely the music I will compose until I record all that. So expect many more releases of Angelgoat.

11.What are some of the bands or musical styles that have had an influence on your music and also what are you listening to nowadays?
My musical taste is quite wide, and still I listen even some non-metal music, which is a quite surprise to some people, mostly thinking that I'm only into Raw Black Metal. But yeah, I'm mostly into some raw primitive Black/Death Metal...
The bands are many, but if I should mention someone, it would be definitely the Nuclear Holocausto of Beherit, which I respect the most.
These days I'm into listening the Soul Butcher, a great Darkthronish Black Metal band with punk influences, and the Black Metal / Ambient band called Rdja. Good riffing with the amazing atmosphere...

12.Before we wrap up this interview, do you have any final words or thoughts?
Thank you for your time and support to Angelgoat. Hail Satan! 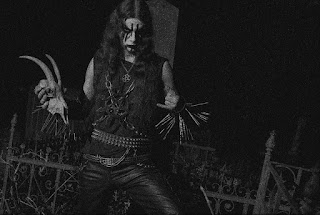 http//www.angelgoat.net
Posted by OccultBlackMetal at 6:19 PM