Devil With No Name Interview 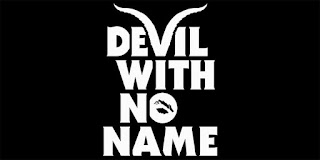 The self title is our first release. Lots of high powered tone, grooves, and keeping things real. No imitation necessary. Sick of most of anything these days and not trying to fit into someone else’s previous mold. Devil With No Name is doing something else.

2.You have an ep coming out in May, can you tell us a little bit more about the musical style you went for on the recording?

Well we all like metal, and we’re all generally from the West. I am now for the past 6 years. The band is taking inspiration from the environment and whatever else suits our fancy whether in the occult or the blatantly obvious. Or what should be blatantly obvious. I like outlaw country music. While not heavy in the sound of this band at the moment, I think some of that attitude is here.

Being in the devil’s shoes and up to devilish things. Lots of self-interest with that, but also some camaraderie is welcome with everyone that gets it. We’re also a band after all and not one person.

4.All of the band members are also involved with other bands, what is it that you bring into the music of 'Devil With No Name' that you are not able to do with your other groups?

I think it’s a fresh outlook music-wise and isn’t trying to be a cookie-cutter kind of outfit. Not my style anyways. There’s longevity in our approach.

Rodrigo Pereira Salvatierra did it. From his words, “The main image, this is a powerful being, from which blood flows and attracts skeletal and dying beings, born of the darkness they approach but do not know what to do with that red element. This blood turns to fire and something burns with it, the crowd gathers around it and is confused there is one of these skeletons who eats this blood, departs from the rest, is no longer in agony but is seen to be different He is eating and there is a line that identifies him directly with the powerful being, this is knowledge, wisdom. The emancipation of everything ... is becoming an individual being, ceasing to be a sheep. In time he will no longer need anything else, no other wisdom, teachers, archetypes, He will not kneel before anyone, or anything, or gods with halos or horns....” Absolutely appropriate to the release.

6.Has the band had any opportunities to do any live shows yet?

It’s pretty bad timing in terms of shows with all the mask wearing and shut down venues. In any case, this is a band meant to play live.

7.The new ep is coming out on 'New Density', how did you get in contact with this label?

New Density is mine. I am the label. I’ve been pressing releases I’m involved with for a few years now. At some point I may branch off into doing outside releases as well. That’s starting to happen. I have a hell of a sense of quality control to the point where I’m told I’m an asshole. Comes with the territory I guess. My pressings speak for it though and look great.

It’s too early to tell as this release and band was just announced about two months ago. I have some good feels about it.

Lord Mantis just had to cancel a shit load of shows for this year. I shouldn’t say canceled though as technically a few tours we were going to do are being rescheduled to 2021. Ready when you are.

Just started writing some riffage the other day. I had to wait until this release was in its final stages before getting into that mental state. Sounding sick so far. I want to attack people’s opinions on what black metal can be and become. Come fight me.

Let’s see today I was listening to a few records. Cure Pornography, a Merle Haggard cd that pissed me off because I didn’t like the versions of the songs on it (some recorded versions are way better than others), High on Fire, Kat from Poland, and Burzum Filosofem (for me an eternal classic) I listen to a wide range of content.

If you’ve read this far give our full ep a listen.

Posted by OccultBlackMetal at 12:42 AM