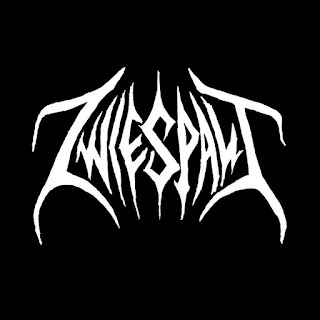 1. I am Forest and was writing songs for some years on my own and took the name Zwiespalt for this project. I always wanted to create something in the vein of early nineties back metal I grew up with but with my own touch. I knew the vocalist Fur since high school and when he started the band Zeit with Win on drums during college I met Win too. At some point I showed them some mp3s made with drum computer and both said that's not too bad and if I wanted to, they would like to help recording it. This is how Ambivalenz, our first record, was created.

2.In January you released your first album, can you tell us a little bit more about the musical style you went for on the recording?
2. I guess we went for the Darkthrone approach. Keeping it minimalistic and raw, but with a certain atmosphere. Atmosphere is all.

3.What are some of the lyrical topics and subjects you have explored on the new album?
3. The lyrical topics can be summed up as my own views on life, my experiences, my own inner conflicts and how I cope with them. Every song also has a very personal meaning to me and is connected to some moment when I actually felt something in some way, but I tried to abstract that in painting landscapes like forests or shores. I also tried to arrange the songs in order, so they lead to the album title. They start about interaction, than about the following isolation and then the acknowledgement that this will always iterate over and over again and that you have to accept and embrace all the controversial thoughts and feelings as they are essentially the fuel for creating something new.

4.You have also mention some influence from Nietzsche and other philosophers, what are some of the other philosophers that have had an influence on your songwriting?
4. Many people connect Nietzsche to Black Metal solely because of the Antichrist. It's a good read, but I am more fascinated by how Nietzsche evolved his thoughts from the nihilistic views of an almost whiney Schopenhauer to some almost Buddhist views. For example in his concept of the eternal return which inspired our last track „Wiederkehr“. As he refers to other philosophers, like Schopenhauer, Kant or Sokrates, I read that stuff too, to understand what Nietzsche actually wanted to say. If you only read Nietzsche, there is the danger to have him idolized. You don't want idols. Take inspiration, but think for yourself.

5.What is the meaning and inspiration behind the name 'Zwiespalt'?
5. Zwiespalt can mean something like inner conflict or conflicting ideas. I chose that as a concept for my lyrics, because I often feel, like the protagonist in Goethe's Faust, I am having at least two souls in one's chest. I am not very often at peace with myself, actually it feels like war. And war and Faust have always been great topics for such a controversial genre as black metal. In addition, in German Zwiespalt can literally mean splitting something in two. I like it when things can have more than one meaning, which I always try to achieve in my lyrics too.

6.Can you tell us a little bit more about the artwork that is presented on the new album cover?
6. The shot used as our Artwork was taken at a place that is very special to me. I know this place since being a child. We live in a very urban place, Leipzig is a rather large city with over half a million people. But then there is this small moor aligned by dead trees. In fact, it once was a fancy park created to match the English style and nature is taking it back now by time. And I think it is getting more beautiful in that way. It has an archaic, primal touch and so it fits the record quite well. Hanging out there as a teen at night, listening to some tunes from Mayhem and Darkthrone felt somehow special. It was the closest thing to going into the woods, getting inspired by nature. Especially when the fog rises. To quote Dead: "only dead trees are growing here".

7.What are some of the best shows that the band has played so far and also how would you describe your stage performance?
7. That's another point where we are or at least I am very Darkthrone-ish. While the other two play a lot of live shows with Zeit, I myself do not enjoy playing live and can totally understand why Fenriz doesn't like that either. I had that with my first band and it's just not for me. I want people to listen to what I create, but I don't like them to watch me. Don't get it wrong, but I am just not a good poser. I want to have the focus on the music, not the people making it. That's why there are also no band pictures.

8.Currently you are unsigned, are you looking for a label or have received any interest?
8. I don't mind reaching more people with our art, if I would not want it to be spread, why release it in the first place. But we do this out of passion in our spare time and not for a living. Having a label would of course be nice for distribution. But the offers we got would mean to bring up a lot of money ourselves to join and that's why for now there are no actual plans for signing.

9.On a worldwide level how has the reaction been to your music by fans of black metal?
9. I like the fact that we reached black metal fans not only from Germany but from all around the globe. I had my concerns if our record would be well received, as on one hand it is very Lo-fi and raw, but on the other hand we chose not to do a black and white cover or some corpse paint pictures. I guess we could have reached more attention with that, and it maybe would have fitted the music better, but that would not be me, so it would not be true. And I am satisfied with the reactions as it is.

10.Where do you see the band heading into musically during the future?
10. Just before the Covid-19 situation, we already rehearsed three new songs, now I am writing on my own again, as soon as there is enough material, we might start recording again. The style we developed on Ambivalenz is what I want to do, what I wanted to do for many years, therefore it will not change too much, but of course I try not to do the same riffs over and over again.

11.What are some of the bands or musical style that have had an influence on your music and also what are you listening to nowadays?
11. My main influence on the riffing would be the Norwegian classics from 91 to around 95, but I also like some of the Finnish or eastern styles infused with folk or the atmospheric stuff referred to as Cascadian black metal. I grew up with both black metal and hardcore punkrock and I liked both for their raw energy, but I always would prefer black metal because of the atmosphere. That's also the main thing for us three, but everyone has its different favourites. Some new stuff we all enjoy to listen to are Fluisteraars, Ultha or Gold. I myself dig the Nidrosian stuff as Vemod or Mare and there are some interesting German underground bands like Arcane Frost, Nemesis Sopor, Apathie. And don’t forget Zeit. Check them out if you like a bit of sludge in your Black metal. When I want to scratch my punk itch I like to listen to some d-beat like Disfear or Victims.

12.Before we wrap up this interview, do you have any final words or thoughts?
12. Thank you for your interest in Zwiespalt and taking your time for this interview.

Posted by OccultBlackMetal at 10:16 PM