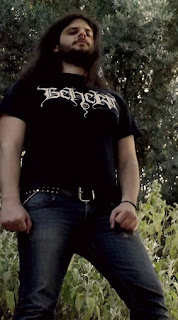 1.For those that have never heard of you before, can you tell us a little bit about the musical project?
1. Daemon οf Oa is an one man black metal project formed in Patras, Greece in 2016. I had some spare thoughts for quite a long time and so I decided to gather them all together thus creating the album. I was in a heavy metal band called Clamor of existence from 2011 until 2016, so it had my undivided attention. I released an EP on September of 2017 called “An evil inhale” and on January of 2018 i moved on to release a full length called “Death iniates life”.

2.So far you have released an ep and a full length, how would you describe the musical sound that is presented on both of the recordings and also how do they differ from eah other?

2. The EP was made with no production knowledge, as i am now working for the first time on the production part on my own. In 'Death initates life' i tried to improve it. The second album has more melody, which is an integral part of my music.

3.What are some of the lyrical topics and subjects you explore with your music?
3. The lyrics have to do mainly with intense feelings that I hide under metaphors. I also use Satan as a symbol of independence and resistance. The second album moves as far as the theme in situations like depression, internal battles, man's tendency to self-destruction, but also other themes that are stories of mythical/fictional content that I have made up myself.

4.What is the meaning and inspiration behind the name 'Daemon Of Oa'?
4. The inspiration came from the name of a well-known ancient Greek musicologist, Damon, from the OA area of Athens. This musicologist had a theory on how music affects people. In the name I added an 'e' to make it look like a demon, which creates various associations based on what I said.

5.With this project you record every by yourself but have worked with a full band before, how would you compare the two?
5. With Clamor of Existence I learned some basic things, such as the art of bonding musical instruments in harmony. I also had my first experiences with music composition and professional production.

6.Currently you are unsigned, are you looking for a label or have received any interest?
6.At the moment I am searching for a label.

7.On a worldwide level how has the feedback been to your music by fans of black metal?
7. I have received positive feedback so far, while trying to promote my music by myself.

8.Where do you see yourself heading into as a musician in the future?

8. Music is an important part of my life. It is a means of exploring myself and what I am trying to do is transfer my experiences from this journey to someone else and if I can somehow create emotions to the listener. I will continue to do so, for as long as I can.

9.What are some of the bands or musical styles that have had an influence on your music and also what are you listening to nowadays?
9. Darkthrone, Ιnquisition, Rotting Christ, Gorgoroth and Nachtmystium are my basic influenses. I mostly listen to BM bands from the  90’s, heavy metal and speed thrash.

10.How would you describe your views on Satanism and Occultism?
10. I use Satan as a symbol of independence and resistance, but also as a means of getting in touch with the deeper knowledge of ourselves that we are deeply afraid of. It is a dark pulse that pierces through me when composing music.

11.What are some of your non musical interests?
11. I like literature as a reader but as a writer as well. I am also working on my phD dealing with mental illness in ancient Greece.

12.Before we wrap up this interview, do you have any final words or thoughts?
12. Thank you for having me here.