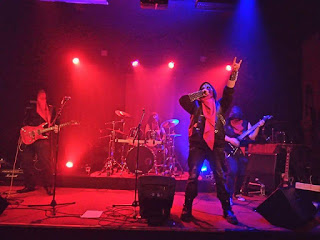 1.For those that have never heard of you before, can you tell us a little bit about the band?
1. We are very young outfit but we have strong, history-related vision.

2.So far you have released a demo and a full length, how would you describe the musical sound that is presented on both of the recordings and also how do they differ from each other?
2. Demo consists of separated stand-alone songs, whereas the full-length is a bigger entirety and songs a lot more melodic and progressive.

3.Your lyrics cover Satanism and some anti Muslim and Christian topics, can you tell us a little bit more about your interest in Satanism and your hatred for white light religions?
3. The hatred you are pointing there isn't only related to Satanism. Some bands write their lyrics based only on the Satanism doctrines, while we write what makes sense individually.

4.What is the meaning and inspiration behind the name 'Vihamieli'?

4. It's a very abstract and multi-dimensional phenom. For us it mainly means freedom and individuality to express ourselves and channel energies, back and forth.

5. In an event year back, there was dense atmosphere, both physically and mentally, a lot of energies were channeled. We have mystical approach, we hide our identities. Music creates hypnotic atmosphere where we deliver powerful music that has endless amounts of nuances to absorb.

6. Only time can tell where our path will lead.


7.Currently you are unsigned,a re you looking for a label or have received any interest?
7. Our full-length was released as CD by Hidden Marly Production and as cassette by Corde Raide Productions. Currently we are not actively seeking for labels, we are focusing in the music. We are constantly receiving offers from labels worldwide.

8.On a worldwide level how has the feedback been to your music by fans of black metal?
8. Creations have been described to be melodic, interesting and influenced by 90's.

9.When can we expect new material and also where do you see the band heading into musically during the future?
9. The channeling is currently in process and will be revealed once it is the time for it. We will be breaking musical boundaries also in future, so only time will tell.

10.What are some of the bands or musical styles that have had an influence on your music and also what are you listening to nowadays?
10. We are not strictly limited to only one style of music and as a matter of fact bands like Depeche Mode and The Cure are influencing our current material. We listen this and that, whatever is interesting, regardless of the genre.

11.What are some of your non musical interests?
11. Practicing dark arts.

Posted by OccultBlackMetal at 11:27 AM