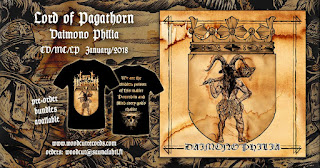 C: Our newest album “Daimono Philia” was released at the end of the January 2018 (regular CD & digipack CD) by Woodcut Records. Vinyl and cassette will be out at the end of the February. At this moment I am working with the new material for the third album with our bassist Skrubb. Next album will consist of eight songs and hopefully we can enter the studio at the beginning of the year 2019.

C: Sometimes I have descripted our music with these next words (which are still valid in the newest album too): “We try to capture the northern feelings to the songs. It is amazing atmosphere when you spend your time in the wintry forest, daylight time is very short, snow is cracking under your shoes and cold air is almost freezing you to death. When you combine that idea with chainsaw guitars and bass, bounding barbaric drums and creeping vocals, then you get some idea how we are sounding. I hope we have managed to create our own heavy and pressuring soundscape which don´t give any remorse.”

In sound-wise the differences are coming from the guitar tunings. In early 90`s we used E tuned guitars and nowadays we are using lower tuning.

3.The band was broken up for a few years, what was the cause of the split and also the decision to reform?

C: Band was split up in 1995 and during that time it was quite impossible to find good and dedicated members for the band in the area where I was living. During these years I have had lots of ideas for the new material for Lord of Pagathorn. But it took many years to form a new line up…line up was completed in 2010 when Hellwind (drums) and Sedit (bass) joined the band.

C: In this new “Daimono Philia” album, lyrics are dealing about the evil itself, revenge and the crush
of the holy trinity.

5.I have read in the past the band has never done any live shows, is that going to changein 2018?

C: We are interested to do the gigs in the future but once again we have faced the line-up problems. It will take time to rehearsal all necessary songs from the past releases with the new drummer. Also we have to concentrate to rehearse songs for the next album.

6.Between 2014 and 2018 there was no new material, can you tell us a little bit more about what was going on during that time frame?

C: In 2014 our first full-length album “Nekros Philia” was released. Our bass player Sedit decided to leave from the band and it took time to find new band member. Skrubb (ex-Taake live guitarist) decided to choose our ranks and took the bass guitar as his instrument of violence. In 2015 we started to rehearse the tracks for the second full-length album (Daimono Philia) and recordings started at the spring of 2016. Album was recorded, mixed and mastered finally in February 2017. Artwork and layouts for the album took also lots of time, so finally all the material was ready in summer 2017. Our drummer Hellwind decided to leave the band after the recording sessions for the “Daimono Philia” album. We already have an idea for the new drummer and we will release the information later this year.

7.The new album was released on 'Woodcut Records', are you happy with the support that they have given you so far?

C: We are very satisfied all the great work and support what Woodcut Records has done for our band and for the record releases.

C: Feedback has been surprisingly good release after release.

9.Are any of the band members currently involved with any other bands or musical projects these days?

C: At this moment I am also playing in a band called Witchakal. We are working for the full length album at this moment. All the tracks are recorded except vocals because Mr. SELFDESECRATOR from Slaughtbbath haven´t visited in Finland for a while.

C:Lets keep that as a secret. You can hear the progress from the next album somewhere in 2019.

11.What are some of the bands or musical styles that have had an influence on your newer music and also what are you listening to nowadays/

C: OK, if I have to choose the influences for the music from the bands, then I can say we have been strongly influenced by early 90´s Finnish underground black and death metal bands. Also Drawing Down The Moon by Beherit and first two album by Master´s Hammer have been great inspirations. At this moment I can recommend “Henbane” album by Cultes Des Ghoules. That album sounds like it was made in 1991.

12.How would you describe your views on Satanism and Occultism?

C: In short I can say; if you have chosen the way of the left hand path, you cannot hop off and hop on when you feel so.

C: Thank you for the good and interesting interview questions. Those who are interested to get our releases, take a look at Woodcut Records campsite.

www.lordofpagathorn.com
Posted by OccultBlackMetal at 1:07 PM