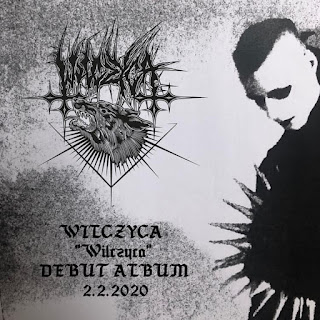 We’v met 17 years on a Marlyn Manson gig and from the beginning we had starting a band in mind. We didn’t think that it would take that long, though. Wilczyca needed some specific emotional context. The spark finally came. Everything that happened before that, isn’t significant.

2.You have your first album coming out in February, can you tell us a little bit more about the musical style you went for on the recording?

Wilczyca come from the 90’s. Early black metal from that era molded us. We love the Lo-Fi approach of that aesthetic - its fundamental to our style.

We listen to a variety of musical styles, but only a few are hearable on this album.

It’s typical for this genre mix of blasphemy, poetry and mental disorders. All fueled by our passionate hate to christianity.

4.What is the meaning and inspiration behind the name ‚Wilczyca'?

Wilczyca means „she-wolf”. A wolf, since the early beginnings of black metal was a commonly used symbol. Using a female form was a deliberate decision - we honored the female element: present in pagan spirituality, yet oppressed in almost all religious systems.

The artwork displays a she-wolf. She’s gonna eat you alive.

6.Currently there are only 2 members in the band, are you open to expanding your line up or do you prefer to remain a duo?

Wilczyca will remain a duo, It’s an essential part of the band concept. Our work is a result of a friction between two personalities. Any new agent would change it’s nature, therefore it would not be Wilczyca anymore.

Although, we’re gonna play live with a bigger line up, it’s the only acceptable way of expanding the band.

7.The new album is going to be released on 'Godz Ov War Productions', how did you get in contact with this label?

We were connected with the label thanks to Haldor Grunberg- producer, sound engineer and musician well known on a polish metal scene. We know him for years, so we send him a demo. Few weeks later our first track was available via Godz Ov War Productions. These guys are fast and effective.

8.The band is from Poland a country known for having plenty of black metal bands, do you feel your style differs from the other bands of your homeland?

For many years there was a drive within a black metal scene to seek for originality and fresh forms. We are not into that. Wilczyca’s concept is pure and classic. That is a main difference in our opinion.

All of the reactions we received were positive. We feel there is a lot of nostalgia for early black metal attitude. Nonetheless, the album has’t beed released yet, so there is still lot to come.

10.Where do you see the band heading into musically during the future? We wish we’d know that.

No laws, no rules , black metal at it’s purest!

https://www.facebook.com/wilczyca.kult/
Posted by OccultBlackMetal at 11:46 AM