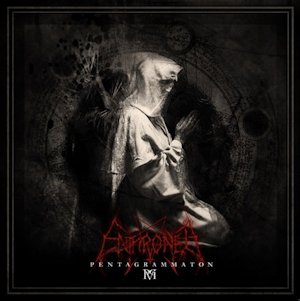 Enthroned are a band from Belgium that has been around since the early 90's and are a very well known band among black metaller's and this is a review of their 2010 album "Pentagrammaton" which was released by Regain Records.

Drums alternate between being slow, mid paced to fast with a lot of brutal blast beats, has a dark tone that follows the riffs that are coming out of the guitars and at times the instrument has a very powerful sound of it's own, as for the effects when they are utilized they bring an avant garde edge to the music which gives the music a more occult sound.

Rhythm guitars cover a good amount of variety with a mixture of slow, mid paced to fast black metal riffs that contain a good amount of melody, while the lead guitars are very dark sounding black metal guitar solos that are very melodic mixed in with some more traditional metal influences.

Vocals are mostly high pitched black metal screams with a small amount of deep growls and some chanting, while the lyrics cover the classic grimoires, Goetic demons, Cabbalistic and Egyptian Occultism instead of the more Satanic topics that where used on the earlier albums, as for the production it sounds very professional and all of the instruments have a very good sound to them.

In my opinion this is another good album from Enthroned that goes even more deeper into the occult than previous albums, it while it is as not as raw sounding as their earlier material, fans of their last album should enjoy this new recording. RECOMMENDED TRACKS INCLUDE "The Vitalized Shell" "Magnvs Princeps Leopardi" "Pentagrammaton" and "Unconsious Minds". RECOMMENDED BUY.