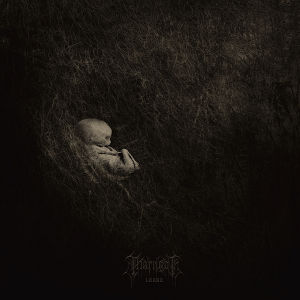 Thorngoth are a band from Germany that plays a raw and fast form of black metal that has been around since the early 2000's and also has a couple of members that have played in some well known German black metal bands and this is a review of their 2010 album "Leere" which was released by Folter Records.

Drums range from being slow, mid paced to fast with a lot of blast beats, while the bass playing has a dark tone which follows the riffs that are coming out of the guitars and at times they have a very powerful sound of it's own, as for the keyboards they are only used for a few seconds and they bring a dark edge to the music.

Rhythm guitars are very primal and raw black metal riffs that are slow and depressive at times with some mid paced to fast riffing with a small amount of melody and a thrash edge being used at times, while the lead guitars are very raw and sometimes depressing black metal guitar solos, as for the acoustic guitars when they are used on the last song they use open chords that give the music a darker sound.

Vocals are mostly high pitched black metal screams with some deep growls and a small amount of clean singing, while the lyrics cover occultism, sorrow and death, as for the production it is very dark and raw sounding.

In my opinion Thorngoth are a very good band that should appeal to all fans of true raw black metal. RECOMMENDED TRACKS INCLUDE "Leere I, III, IV and VII". RECOMMENDED BUY.

www.thorngoth.de
Posted by OccultBlackMetal at 7:54 PM