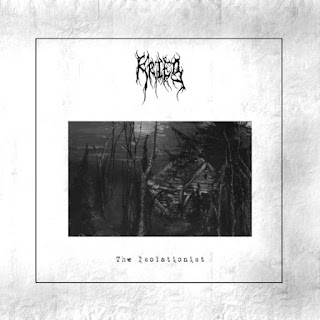 Krieg are a band from New Jersey that has been around since the 90's and are one of the most well known US black metal bands and this is a review of their comeback album "The Isolationist" which will be released by Candlelight Records.

Drums are mostly fast with a lot of brutal blast beats with some slow playing being used at times, while the bass playing sounds very powerful with a mixture of slow,fast and distorted riffs that bring a deep sound to the primal music on this recording, as for the synth it is only used briefly the enhance the dark nature of the music mixed in with some avant garde and experimental music influences.

Rhythm guitars are mostly fast primal black metal riffs that slow down at times and bring a doomy edge to the music that contains a small amount of melody at times, and there are no lead guitars or solos present on this album except for maybe a few seconds.

Vocals are all high pitched black metal screams with some deep growls being used at times, while the lyrics touch on the corruptions of religion, hatred, depression and other dark themes, as for the production it is very raw sounding that makes the primal music sound much darker.

In my opinion this is a great comeback album from Krieg and if you are a fan of their previous albums you will not be disappointed. RECOMMENDED TRACKS INCLUDE "No Future" "All Paths To God" "Inhalation Decays" and "Dead Windows". RECOMMENDED BUY.

http://www.myspace.com/officialkrieg
Posted by OccultBlackMetal at 6:22 PM