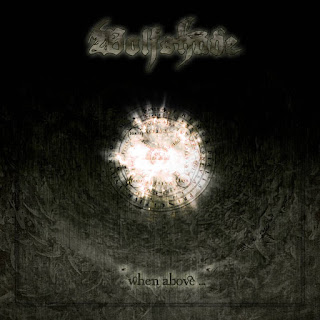 Wolfshade are a 1 man band from France that plays a down  tempo  and  depressing form of dark black metal and this is a review of their 2010 "When Above" which was released by Wraith Productions.

Drum beats are mostly slow with no fast playing or blast beats being used, while the keyboards have a depressing ambient feel to them, as for the bass playing it is all slow and primal.

Vocals are high pitched suicidal black metal screams with some clean singing being used at times mixed in with some whispered vocals, while the lyrics are written in a mixture of French and English and cover cabalistic occultism with a more left hand path approach as well as some H.P Lovecraft themes, with a dose of dreams, darkness and myths, as for the production it is very dark sounding which is a perfect balance for this depressive ambient black metal sound this album haves.

In my opinion Wolfshade are a very good band that should appeal to fans of depressive black metal with a more occult/esoteric edge. RECOMMENDED TRACKS INCLUDE "Bene Elohim" "Le Refugie Des Passions" and "Incipit Vita Nova". RECOMMENDED BUY.