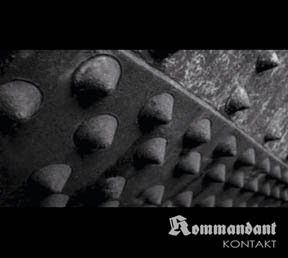 Kommandant are a band from Chicago. Illinois that plays a very chaotic form of black metal and this is a review of their 2010 album "Kontack" which was released by Planet Metal.

Drums alternate between mid paced and fast playing with some brutal blast beats being thrown in the music, while the bass playing is mixed low in the music and follows the riffs that are coming out of the guitars.

Rhythm guitars are mostly mid paced to fast holocaust black meta; riffs that are very heavy and brutal, and there are little to no lead guitars or solos present on this album.

Vocals are mostly high pitched black metal screams with some deep growls being thrown in on occasion, while the lyrics cover war themes, as for the production it is very raw in the true war/black metal tradition.

In my opinion Kommandant are a very good band that should appeal to all fans of war/black metal. RECOMMENDED TRACKS INCLUDE "Anti Human Nemesis" and "Sulphur Chariot". RECOMMENDED BUY.

www.myspace.com/kommandantofficial1
Posted by OccultBlackMetal at 8:02 PM