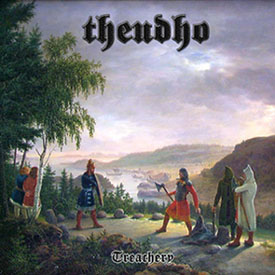 Theudho are a blackened pagan metal band from Belgium that has heard some of their music reviewed by this zine and this is a review of their 2004 album "Treachery" which was re-issued on vinyl in 2010 by Aurora Australis.

Drums are a mixture of slow, midpaced to fast drumming with little oe no blast beats, while the keyboards are very atmospheric and medievel sounding, as for the bass playing it has a dark tones with riffing that follows the riffs that are coming out of the guitars.

Vocals are all high pitched black metal screams with some spoken word passages mixed in with a small amount of clean singing and some female vocals, while the lyrics cover alot of ground with alot of pagan philosphers being quoated, and some famous historical figures from European history and folklore, Asataru paganism and magick in the more German form and references to the lost continent of Atlantis as well as spme anti xian themes, as for the production it has a very dark but professional feel that gives all of the musical instruments a very good sound.

In my opinion this was a great debut album from Theudho and while all there other music after this was great I still had this had the best lyrical content of all the albums and fans of this band and other pagan/viking.black metal bands should enjoy this album. RECOMMENDED TRACKS INCLUDE "Awakening" "Blot" "The Sword Of Cheru" and "The Frozen Seas Of Atland". RECOMMENDED  BUY.