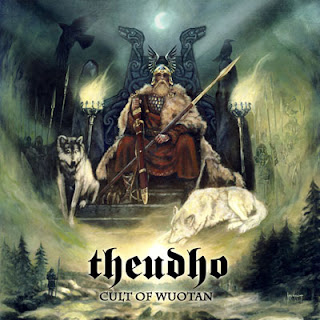 Theudho are a band from Belgium that play a pagan style of black metal and this is a review of their album "The Cult Of Woatan" whicj was released in 2008 by Det Germanamake Folket.

Drums range from midpaced to fast drumming, while the bass playing follows the riffs that are coming out of the guitars, as for the keyboards when they are used they bring an atmospheric feel to the music.

Rhythm guitars are mostly pagan/black metal guitar riffs that range from midpaced to fast and contain a good amount of melody,while the lead guitars are very melodic sounding guitar solos that have a classic metal feel, as for the accoustic guitars they use alot of fingerpicking to get a pagan feel.

Vocals are mostly high pitched black metal screams with some clean singing female vocals being usead at times,while the lyrics cover Asataru from a German instead of Norwegian point of view with some topics about the vikings fighting Romans and some anti christain lyrics, as for the production it sounds very professional and you can hear all of the instruments that are present on this album.

In my opinion Theudho are a very good pagan/viking/black metal band and all fans of this genre will enjoy their music, RECOMMENDED TRACKS INCLUDE "Terror Cimbricus" "Silemce Reigned Over The Blog" "The Fall Of Rome" and "Prophecies In Flames". RECOMMENDED BUY.

Posted by OccultBlackMetal at 10:35 PM