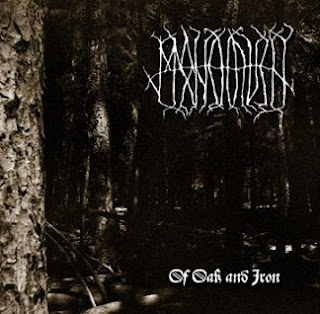 Stonehaven are a band from Kansas that plays a very raw form of black metal that has a heavy pagan feel to it and this is a review of their 2010 album "Of Oak And Iron" which they released by themselves with no record label.

Drums range from mid paced to fast with a lot of brutal blast beats being thrown in, while the bass playing has a very powerful and dark sound that gives the music a more mystical atmosphere.

Rhythm guitars range from mid paced to fast black metal riffing that is very primal and contains a small amount of melody mixed in with a thrash feel at times,while the lead guitars have a depressive feel that also seems to be influenced by older pagan bands, as for the acoustic guitars when they are used they have a medieval feel that calls up the pagan gods.

Vocals are all high pitched black metal screams while the lyrics cover pagan philosophy, battles, and folklore, as for the production it is a very raw and heavy feel which gives all of the musical instruments a very heavy and powerful sound.

In my opinion Stonehaven are a very good band that should appeal to all fans of raw, primitive black/pagan metal and you should also check this band out live, they put on a very good show. RECOMMENDED TRACKS INCLUDE "Corpse Birds" "Longehrpe Arising" and "Fury Of The Seafaerer". RECOMMENDED BUY.

Posted by OccultBlackMetal at 4:47 PM