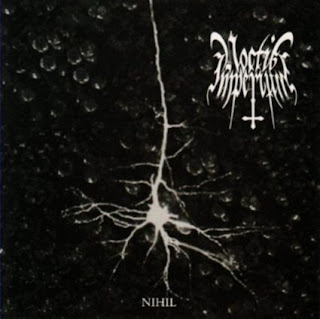 Noctis Imperium are a band from Caracas, Venezuela that plays black metal with a strong death metal edge and this is a review of their 2010 album "Nihil" which was released by Abyss Records.

Drums range from being mid paced to fast with a lot of brutal blast beats while the bass playing has a very powerful sound of it own with a lot of fast and dark riffs, as for the keyboards they are rarely used but when utilized they are only there to enhance atmosphere..

Rhythm guitars combine the heaviest and fastest elements of black and death metal together while staying on the more dark side, while the lead guitars are very melodic and contain a lot of early 90's satanic death metal influences.

Vocals are mostly high pitched black metal screams with some deep death metal growls, while the lyrics cover some Thelemic occultism, darkness, war, and imperialism, as for the production it has a very professional sound and you can hear all of the instruments that are present on this album.

In my opinion Noctis Imperium are good for what they do with the way they mix modern black metal with some death metal influences, and I can see this band getting mixed reviews in the underground since they are too primal for the mainstream black metal audience but probably would not be considered true by some of the more underground black metal audience, but other than that this is still a good metal album that would appeal to fans of Dark Funeral, Belphegor and other bands similar.
RECOMMENDED TRACKS INCLUDE "Bring Me Sacrifice" and "Unus In Nihil". RECOMMENDED  BUY.

www.myspace.com/noctisimperium
Posted by OccultBlackMetal at 8:35 PM