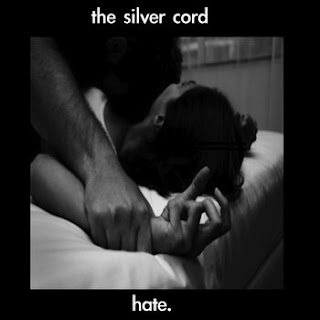 The Silver Cord are a band from Colorado that plays experimental/dark/black metal who have also had their previous ep reviewed in this zine and this is a review of their self released 2010 album "Hate".

Drum programming are mostly slow beats that are coming out of a drum machine, while the keyboards are very atmospheric and ambient sounding which gives the music a very dark edge, as for the bass playing it has a very heavy tone.

Rhythm guitars are mostly slow and heavy riffs that contain a lot of distortion and has elements of both black and doom metal mixed in with some ambient influences, and there are little to no lead guitars or solos present on this recording.

Vocals are mostly clean singing vocals that sound very dark and tragic that have a rough edge to them at times with some high pitched black metal screams and deep growls being thrown in at times, while the lyrics are very depressed and hateful, as for the production it sounds very professional and you can hear all of the instruments that are present on this album.

In my opinion this is a good album from The Silver Chord that should appeal to the more open minded fans of black metal as well as fans of avant garde and gothic music. RECOMMENDED TRACKS INCLUDE "Sin" "Hate" "The Dawn Will Never Come" and "Bodies". RECOMMENDED BUY.

https://www.facebook.com/thesilvercorddenver/
Posted by OccultBlackMetal at 11:28 AM