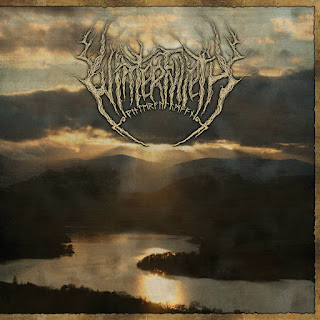 Winterfylleff are a band from the U.K that plays a pagan form of black metal that has a folk and melodic edge and this is a review of their 2010 album "The Mercian Sphere" which was released by Candlelight Records.

Drums cover a good amount of variety with drumming that ranges from slow, mid paced to fast with a lot of brutal blast beats, while the bass playing has a very strong sounding tone that follows the riffs that are coming out of the guitars as for the flute  when it is used it evokes memories of medieval times with a very ancient feel.

Rhythm guitars are mostly pagan/black metal guitar riffs that range from being slow, mid paced to fast with a good amount of melody, while lead guitars when they are used a very melodic sounding guitar leads, as for the acoustic guitars it brings a heavy folk/pagan element to the music with the use of open chords and some melodic finger picking that has the feel of a classical guitar.

Vocals are mostly high pitched black metal screams with some deep growling as well as clean singing viking metal vocals, while the lyrics cover, while the lyrics cover Anglo Saxon Heritage, pride and paganism as for the production it has a very professional sound and you can hear all of the musical instruments that are used on this album.

In my opinion Winterfylleff are a very good pagan/black metal band and while they are not the most original sounding band, they still do a great job with their music and fans of pagan/black metal will find this to be a very good addition to their collection. RECOMMENDED TRACKS INCLUDE "Gateway The Wayferer Part 1" "The Honour Of Good Men" "Defending The Realm" "A Valley Thick With Oaks" and "When The Woods Were Young". RECOMMENDED BUY.