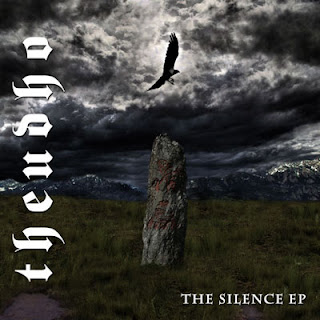 Theudho are a band from Belgium that has one of their full lengths previously reviewed in this zine and this is a review of their 2009 EP "The Silence" which was released from ConSouling Sounds.

Drums are a misture of midpaced to fast drumming with little to no blast beats, while the bass playing has a very heavy and dark tone which follows the riffs that are coming out of the guitars.

Rhythm guitars are mostly pagan/black metal riffs that range from midpaced to fast with a thrash feel being utilized at times, while the lead guitars are melodic sounding pagan metal guitar solos that contain even more melody than the full length, as for the accoustic guitars when they are used they use open chords to give the music a folk feel.

Vocals are mostly high pitched black metal screams that have a little bit of a deep growl being used at times mixed in with a small amount of clean singing, while the lyrics are written in a mixture of German and English that are written about Norse Mythology and Asataru in it's more German form, as for the production it sounds very professional and you can hear all of the instruments that are present on this recording.

In my opinion this is another good release from Theudho that shows more growth and progression and fans of pagan/viking black metal will enjoy this release. RECOMMENDED TRACKS INCLUDE "Fafnor's Blut" and "A Fone Day To Die" which is a Bathory cover. RECOMMENDED   BUY.

Posted by OccultBlackMetal at 7:04 PM