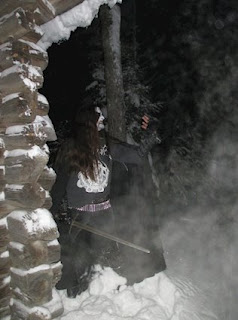 The first line-up of YMIR was at 1998, and it worked under the name "Tuonela" few years earlier. We changed style little bit from those days and  result was Trollsword demo at  1999. We soon moved to different cities, I joined Horna and also Baptism was created by my

brother, Lord S  approximately the same time. The second line-up was me and Lord S. in form of "Silvery Howling" demo on 2002, released by Werewolf recs at 2003. The line-up on the full-lenght is also added two new session members, Ghast from the first line-up and a session drummer. But the composition, lyrics and other responsibilities are always been done by me from the very beginning.

2.In November you have your first full length coming out, musically how does it differ from your previous demo's?

I would say musically not that much - its totally the same world, that I just wanted to bring back to life to the present moment. The certain mood and sound has been gone from Scandinavian BM, and I wanted to take both modern and somewhat retrospective look into it. To travel back to those times and create new beginnings.

3.The band released a demo in the mid 90's and another one in 2006 and disappearing before 2020, can you tell us a little bit more about what has been going on during that time frame?

I wrote some material also after that, and some songs on the new album are from 2005 or so. So the first album its basically a collection of old and new material, done in the same methods than back in the days, old amps and gear,

The concept of the whole recording was live takes, no corrections or mastering for the audio tracks and a fast wrap-up. That way, I believe,  more natural energy is preserved to the final result and that's the thing I'm always after.

4.A lot of the lyrics and the band name come from Norse Paganism, can you tell us a little bit more about your interest in this topic and also do you have any interest in other forms of paganism?

I have always felt the most valuable things about Black Metal as artform or music relate to realistic and sometimes controversial ways of thinking, making it a reflection of life itself. Paganism, modern tribalism, stoicism, all were ideologically remained pieces of mental  and physical warrior cultures, starting from the pre-roman days and much further. The original purpose to me, at least here in Scandinavia was take a step aside from certain cultural patterns offered by society, religion being main opposer.

For the same reasons I find it hard to relate Hebrew mysticism mixed into Black Metal, it's just a commercial value for theatrical purposes as well as handling personal problems, like in suicidal BM movement, it's pretty pathetic.

5.Can you tell us a little bit more about the artwork that is presented on the new album cover?.

The artwork is framing the music in very simple terms, I just wanted things to remain as raw and natural as possible, and fit into the music instantly.

6.Has the band done any live shows or open to the opportunity?

We never played live, but I have gathered a group of musicians from the old Finnish scene to make the next album and live shows possible in the future, hopefully next year.

7.Both of the band members also have a history going back to the 90's and also have played in some very well known Finnish black metal bands, what is it that motivates you to keep going after more than 20 years?

I just lost interest for BM for couple of years, mainly for the aforementioned bad musical and ideological, religious direction of the whole style. I worked with another bands for the time being, and it also gave a fresh distance to the band and other things, also to find this style of BM now more valuable than ever.

By all means, it's an old band but realistically a new one.

Of course people have been interested about it, but since this is just starting, everything is still building up slowly. I'm just curious how it will sound to the today's listeners.

I have actually composed the second album already, and we are building it together slowly with more variety, especially in vocals and keys and songwriting on general. I believe the main direction is the same with some new approaches.

For Ymir, the main influences have always been 93-97, or second wave Scandinavian BM, namely Satyricon, Ulver, early Dimmu Borgir and the likes as well as European bands like Katharsis, Moonblood, early Nargaroth, Blazebirth Hall bands, and so forth.

For myself, I  basically listen almost all styles of metal music, 19th century classical music and all kinds of minimalist music, regardless of the genre.

Check out the album from Hells Headbangers and Werewolf recs. Thank you for the interview. 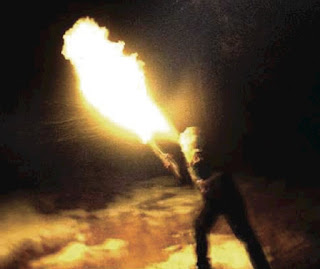 Posted by OccultBlackMetal at 1:39 PM