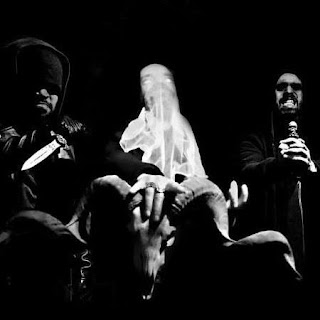 Morte is a band whos main musical style is within the Black Metal genre. With that and some other musical influences we form a vision of how the music is to be led and focus on keeping that track. This is something done very naturally but for it to happen every one must bring what will better fit with what we do, either is Black or Death Metal, Dark Ambient or noise.

2.Recently the band has released a full length, can you tell us a little bit more about the musical style you went for on the recording?

Dark Music. We say it this way because what we aimed to do, came as the result of mixing several dark influences. We don't like to be dictated by any kind of rules established in any genre. Thus, our creation process is something done in a very raw but simple way.

3.A lot of your lyrics cover satanic and occult themes, can you tell us a little bit more about your interest in the dark arts?

Lyricaly its something we touch either in a very light and covert way, or we can be completely explicit. We do it that way because each one of us has a very unique way of dealing with the occult, and sometimes we don't even think its necessary to expose it. As for the connection every one of us has with that matter, it is something we will not debate since those are personal affairs.

4.What is the meaning and inspiration behind the name 'Morte'?

Morte literaly means Death in English. The inspiration is based on Death itself, for being the only absolute certainty and truth we have, and to be the end of everything of all that exists, has existed or will in this universe we are in.

5.Can you tell us a little bit more about the artwork that is presented on the album cover?

It's a representation of Death as the end of everything. Being impious and colossal, devouring both believers and non believers. That was the vision sought for the album cover.

6.Has the band had any opportunities to do any live shows?

With the pandemic around thinking of live shows at this point is basically pointless. It's something we aren't considering just for now and the focus is in the recently released work, however, it's something always to be looked upon in case an opportunity comes up and the right conditions are met.

7.So far there is very little information about the band online, is it intentional to keep a low profile?

It is intentional although this might change in the near future. We think the Internet is a vast source of information but sometimes it just leads users to a feeling of disorientation - and this is something we want to avoid. We are obviously interested in those seeking what we do, and although information is scarce, we always try to feed people with knowledge of what is really important and relevant. Everything else just ends up being completely indifferent and shallow, giving the follower complete unnecessary information.

8.The album was released on 'Firecum Records', can you tell us a little bit more about this label?

Joining Firecum Records was something that happened quite naturally because there was already a friendship with Peter (Firecum Boss for those who are unaware) with someone within our ranks, and so we knew that he is very trustworthy. Not only that, we also knew that the label has always shown interest in all sorts of bands doing a great job with all of them, even if they are unknown.

We have been having reactions a bit from all over, some are within what we would expect, but some are a complete surprise. Of course a bigger recognition is always satisfying, but we are aware that the album has been released in less than a month so it's still quite recent for us to have the necessary feedback.

We will definitely keep doing what we have done so far in terms of free composing - which was what we did on this record. And we will keep the same musical motto, style and influences, but at the same time improving what we've done previously.

12.Before we wrap up this interview, do you have ant final words or thoughts?

Posted by OccultBlackMetal at 3:27 PM