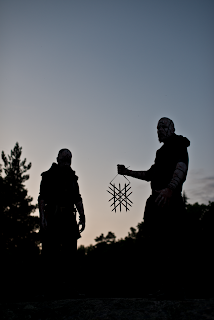 1. For those that have never heard of you before, can you tell us a little bit about the musical project?

We are a two-man Black Metal band from Southern Finland (Salo/Sauvo) formed in 2018. We met via a friend and J.L had some ideas ready, so he asked me if I want to play with him. I said yes really quickly after I heard what kind of black metal he had been composing and now it seems that we have a path to walk together in our lives.

2.In December you have an EP coming out, can you tell us a little bit more about the musical style you went for on the recording?

The style of black metal we play is melodic and epic, yet crushing and unforgiving. The songs are pretty straight-forward, but we wanted it to have an atmosphere that ranges from harsh, dark, and desolate feelings to moments of pure fury. I think we succeeded pretty well in this.

3.A lot of your lyrics cover Heathenry and Scandinavian Mythology, can you tell us a little bit more about your interest in these topics?

Overall we draw power and visions from ancient northern beliefs and nature. We are both very interested in these topics and our ancestors lived all around Scandinavia, so we feel that these tales and beliefs belong to us and is our heritage. The way our ancestors handled spirits, gods, and life itself is pure, beautiful, and still dark and thus it is venerable at least for us.

4.Your lyrics also cover a 'devotion to the dark, can you tell us a little bit more about what this means to you?

Well, we also use satanic themes in our lyrics so on that behalf it’s kind of obvious. We’ve always been fascinated by the presence of darkness. The sinister mysteries that can be felt in the right state of mind and place. It is a universal power that can be used for healing or destroying. So we’ve devoted ourselves to do this art which evolves in the dark corners of our minds.

5.What is the meaning and inspiration behind the name 'Sarvekas'?

Sarvekas is Finnish and means the one with horns and to us the horned one. We do not see Satan as a personified being, but as a force that dwells in us, the primal beast, the destructive powers of nature, and also as a symbol of pureness and of course rebellion.

The front cover has been painted by a Macedonian artist Kristina Pavleska and the rest of the covers were made by Babalon Graphics from Finland. We sent her the music and gave her basically freedom to paint what she wanted and how she experienced our music. As per her saying, while the painting was still in the making, she opted in for a minimalistic way in order to represent the ideology behind this project instead of doing the usual landscapes and forests seen in most cases. Taking a few key moments in the story as one can notice. A partial human form ending with an exposed ribcage representing punishment. Red representing fire and blood as a form of that never-ending cycle of rebirth and war while the scorched souls cry out in an apocalyptic vision surrounding the human figure. Ending with the sword representing the deity of Surtr, piercing through the spine.

7.Currently there are only 2 members in the band, are you open to expanding the line-up or do you prefer to remain a duo?

We came to the conclusion that we will remain as a duo since the compromises are easier that way. We both have our own jobs in this project and it has been clear since the beginning. I write the lyrics and play drums and J.L is composing the music. We still have a line-up ready for the gigs. So as soon as this pandemic is over, we will be able to storm the venues.

8.The EP is coming out on 'Soulseller Records', how did you get in contact with this label?

We sent a digital promo package including promo pics, bio, and one song to labels, and Soulseller Records was one of those who contacted us and in the end, it seemed the best label for us. We’re glad and thankful for this opportunity.

Well, the first single got a pretty good amount of views on Black Metal Promotion’s Youtube channel and the feedback was good. The next single will be released at the start of November so we’ll see what happens next.

All we can say is that we are currently forging new songs. It will be revealed once the time is right. On the future direction of our music, we will stay playing black metal that’s for sure.

Well, Black Metal in general, since we’ve both been listening to it for 20 years. I listen to a lot of other styles of music than metal, but usually something melancholic or epic gives the inspiration to do this kind of music we make. Of course, the old classics of black metal still gives inspiration and the state of mind that I seek, so they are played regularly. To mention few black metal artists I’ve been listening to lately are: Paysage D’hiver,  Ifernach, Beketh Nexehmu, Whoredom Rife, and Devouring Star

The next single will be officially released on all digital platforms on the 4th of November, but there will be a premiere before that, so keep your eyes peeled on the apocalyptic crimson horizon.