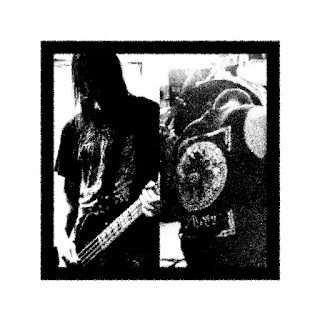 I started the band in february 2020. I had been storing some ideas that didn't fit in my earlier musical projects, which were mostly grindcore and crust, and I wanted to do something with the ideas, basically "riffs". So, to get started I decided to use this maybe 15 years old drum machine I had lying around to make some beats. I asked Stefanator, who I have been playing with in various projects before, to join the band to play the bass. Stefanator agreed, and the drum machine also stayed.

2.Recently you have released a demo, can you tell us a little bit more about the musical style that you went for on the recording?

We didn't have any vision of what it should've sounded like, or how we could even approach any specific sound. All we knew it should be really raw and cold, but in an atmospheric way. The songs were quite new when we recorded them, and we were just concentrated to play them right. I also had a new distortion pedal and I hadn't been doing vocals in a loooooong time. But the recording session was really smooth, and our friend Nihilius did a great job recording and mixing it (eternal gratitude!)

3.What are some of the lyrical topics and subjects that the band has explored so far with the music?

Flesh prison, the first song on the demo, for example, is about the feeling that this civilization - or society- is so repulsive, that one needs to escape from it, but not by straight death, but something 'spiritual', like self improvement, for example. Crushing the wheel deals with the fact that there's no point in trying to build forever lasting imperium's, because they will always fall, and then rise again, then fall again... The ever-repeating cycle must be broken. But how? In what sense?

4.What is the meaning and inspiration behind the name 'Earthly Form'?

It fits perfectly with the so-called philosophy in our lyrics, and it's a synonym with the first song we made, Flesh prison.

5.Can you tell us a little bit more about the artwork that is presented on the demo cover?

I took the picture on one of my hiking trips to a Finnish national park in the spring. It's probably a beaver's nest in a flooded lake. I didn't take the picture for this purpose at first, but later noticed it would make a nice cover.

6.Currrently there are only 2 members in the band, are you open to expanding the line up or do you prefer to remain a duo?

We are not actively looking for new members, but let's say that it's not impossible that we would add a singer, second guitarist or a human drummer to the line up. But it's really great this way too. Maybe if we start doing live shows some day we could use an extra hand on the stage to improve the sound. Or if we simply run out of ideas.

We are looking for a label, but we should be more active in it, like sending tapes etc... We will be recording new stuff in the future anyway, and it would be great to have a label to release it, be it in whichever format.

The reaction has been really good, at least if you compare the streaming and downloading numbers with the little effort we have put into spreading the demo. We don't have any social media, and I haven't personally been a part of any scene, or known 'the right people', so it's great that people have still found our music.

We both have our background in punk, crust and grindcore, and we are still involved in them, but we are into metal too, of course. I can't speak for Stefanator but I have drawn inspiration from all kinds of black metal, from bestial style to melodic atmospheric stuff. I also enjoy death metal a lot, as I enjoy 80's pop music and classical composers, and I'm sure there are influences from those styles too in Earthly Form's music.

Stefanator spends his time with environmental anthropology and video games. For me it's hiking and books. We both are interested in what's happening (and what already has happened) in this world.

Huge thanks & eternal hails for this interview. For those interested, we still have copies of the tape demo left, so just write us at earthlyform@gmail.com to get one for yourself.