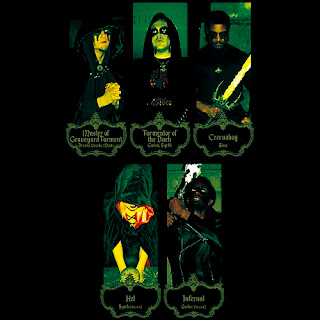 1 . We have all been very busy with our respective projects as well as other mundane non-musical tasks that require attention. However, we have begun some small scale rehearsals for our next release. I will say that after this extended break, we are fired up and hungry to continue our work with AR.

2.You have a new album coming out in November, musically how does it differ from the stuff you have released in the past?

2. "Primeval Devilish Wisdom" is the continuation of the sound we have worked toward since day one. Our previous release "Reverence for the Kings of Hell" was perhaps a loving nod to the elder Hellenic Black Metal scene, by far my favorite music, period . It might be unorthodox to have put out a niche release so early in our discography, but I follow my heart on these matters with no regrets.

3.Your lyrics cover a lot of satanic, occult and witchcraft topics, can you tell us a little bit more about your interest in the dark arts and how your believes have evolved over the years?

3. While I have never considered myself a part of one ideology strictly, I can point to Traditional Satanism, Celtic Shamanism and Chaos Magick as some references. In the earlier years, I walked a more theistic path regarding Satanism, coming from a fundamentalist Pentecostal background, such devotion and faith was already something I was familiar with. As life and time inevitably moved forward, I became obsessed with both the Dee/Crowley/Levi forms of Western Ceremonial Magick and simultaneously also began to seek the darker sides of earth based Magick and shamanism. I now find myself closer to Satan in a well rounded sense than ever before whilst also fascinated with eastern wisdom and sciences, be it mystic works like the "Tibetan Book of the Dead" or the everyday practice and understanding of Tai Chi Chuan. I am a devourer of knowledge and consider myself a student of the universe, proud of my infernal lineage but unbound by feeble human constructs

4.What is the meaning and inspiration behind the name 'Apochryphal Revelation'?

4. AR was given such a title as to be the profaner of Christian lore, altering existing tales and concepts to suit my sometimes twisted imagination. An infernal revelation of slander, blasphemy and disdain towards the hypocritical farce known as Jehovah and his weakling flock.

5. Our artwork to date has been exclusively done by our bassist, Czernobog. I cannot speak to his mindset, but I can say that it was meant to reflect the futility of Christ's death, his fear and lack of faith in his father and also the omnipresence and wisdom of Satan.

6. We are very fortunate to have been a part some excellent gigs. Booking Zemial in 2015 and sharing the stage with such a legend was an incredible honor and a real high point of my life. Detroit has been very kind to us as well, having supported our heroes in Profanatica and Mortuary Drape. Another standout was our performance at Cathedral of the Black Goat in 2016. Despite lacking our dual guitar approach which is now essential to our performances, we played with fire and passion and won over a packed venue who had no prior knowledge of us. I would say our stage show varies, from solemn to furious as dictated by the songs. Now that our drummer has joined full time and I can focus on the vocals exclusively, we can elevate the stage performance to the next level. Perhaps a blend of Mortuary Drape - esque ceremonialism with  GG Allin inspired violence, chaos and general bad attitude.

7.The new album is going to be released on 'Nuclear War Now! Productions, how would you compare working with this label to your older label 'Behold Barbarity'?

7. Our previous label was extremely professional and treated us very well, nothing but kind things to say from our end. NWN has stunned us with his aggressive promotion and deep understanding of the specific style we occupy ourselves with. This label is a perfect fit for us and we hope to continue our working relationship well into the future.

8.On a worldwide level how has the reaction been to your music by fans of black and death metal?

8. I am utterly humbled at the reception we have been given worldwide. We have received admiration and praise from every corner of the world, from dedicated fans to the very people that inspired us to begin playing in the first place. There is indeed a hunger for Black Metal that eschews modern trends in favor of the diabolic older paths. There are many now who I would consider contemporaries with us, but we always strive to have our own identity and approach to making Black Metal.

9. All of us are very busy with projects and most of these involve the same members switching places. Some names we are associated with : Tartarus Gate, Devil's Mass, Catacomba, Pyromancer, Master's Curse, Christrape, Son of Perdition, Cruel Spirit, Shadow Keeper... Expect big things from Tartarus Gate and Devil's Mass in particular in the future!

10. I see us more or less continuing on the same path we have always followed, constantly refining and perfecting what we do. Now that I have fulfilled my personal need to honor the elder Hellenic bands, we can exclusively focus on pushing our individual style as far as we can take it from now on.

11. Some bands that have had a major impact on our development : Profanatica (above all) , Varathron, Mortuary Drape, Mystifier, Thou Art Lord, Master's Hammer, Necromantia, Tormentor (hun) , Beherit, Samael, Archgoat, Sarcofago, Mercyful Fate, Von, Zemial, Barathrum , Demoncy, Dark Throne , Hellhammer… I must also mention that at the time of forming the band, we were heavily inspired by Alioth - Channeling Unclean Spirits, Hail - Inheritance of Evilness, Cult of Daath - Slit Throats and Ritual Nights, Necros Christos - Triune Impurity Rites and Archgoat - Whore of Bethlehem. Nowadays I listen to a wide array of music, far too much to mention. I can however name Ceremonial Torture, Cemetery Lights and Prosanctus Inferi as current obsessions.

12. Thanks for the well thought out interview! I would say follow your heart and be yourself no matter what. Black Metal in it's prime consisted of wildly differing bands united by the desire for darkness and individualism, not rank and file clones existing solely for social purposes. Do not dilute the already oversaturated pool unless you truly have something special to offer.

Posted by OccultBlackMetal at 4:34 PM