1.Can you give us an update on what is going on with the band since the recording and release of the new album?

We are overwhelmed by the great reactions to the album and are looking forward to our upcoming tour when the pandemic is over.

Our new guitarists Morkai and Garm have improved our songwriting to a new level. The songs are heavy and melodic at the same time. Let's say this album is the grown up pagan rebirth of VARG.

3.What are some of the lyrical topics and subjects the band explores on the new album and also how would you describe your progress and songwriters over the years?

With the opening track 793 we draw the listener back to the official beginning of the era of vikings. The lyrics are a journey through paganism, the viking way of life, old gods, heathen values, bloody battles and norse mythology. Over the past 15 years many things have changed for me, I did not only grow older but gained a lot experiences that improve you as a person and hand-by-hand improves you as songwriter of course.

4.Some of your lyrics have also Paganism and Norse Mythology, can you tell us a little bit more about your interest in these topics?

My interest in paganism and norse mythology began in 2005. I read books about these topics and was trying to dig deeper and deeper into it. While most publications only scratched the surface I was happy to find some rare books that described for example the blood eagle ritual which fascinated me a lot. Over the years I have never lost my interest in norse mythology but the real desire for it was reborn around the year 2017. Today I am more interested in these topics than every before.

The artwork is very plain and dark. It focuses on the wolfrune which is the new sign for VARG, like a second band logo. If you look closely you will find some more details.

Our stage performance is more a ritual than a concert. We built a strong connection to the audience and let them dive into the raw era of vikings and the VARG universe we create. Surrounded by iron, runes and fire we feel comfortable and anyone who is willing to join our wolfpack will be rewarded with being part of this ritual.

7.You have also mentioned being against fascism and racism in the past, can you tell us a little bit more about these views?

There's not much to tell. We are against facism and racism and any intelligent person should share this opinion.

8.The new album was released on Napalm Records a label you have worked with in the past, what was the decision behind returning back to this label?

We have never splitted ways with Napalm Records. We released “Wolfszeit II” on our own label Wolf Metal records because it was more a remake than a new album.

9.On a worldwide level how has the reaction been to your newer music by fans of extreme metal?

The reactions have been great. It seems that the pagan rebirth of VARG is exactly what fans were looking for and even some former haters have changed to fans with this new album.

We will definitely follow the path we chose with the new album “Zeichen” and go even further into norse mythology and the viking era.

A big influence for the pagan rebirth of VARG has definitely been Wardruna  who not only do great music but also have an extraordinary live show. Personally I don't listen to new music that often and focus on the good old albums that have been part of my life for many years.

Stay save and healthy and listen to the new VARG album “Zeichen” now! 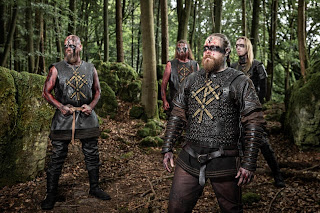 Posted by OccultBlackMetal at 9:17 PM