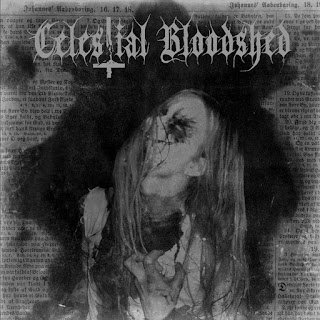 Celestial Bloodshed are a band from Norway whose singer was shot to death a few months after this album was released, which I would describe as raw hateful black metal and this is a review of their 2008 album "Cursed, Sorrow and Forever Possessed" which was released by Moribund Records under exclusive pact with Debemur Morti Productions.

Drums are mostly fast with a lot of blast beats and some slow parts which where used on one song, while the bass playing is kind of hard to hear and the parts I heard seem to follow the riffs coming out of the guitars, as for the synths when they are utilized which is very rare since this is a fast black metal sound very ritualistic and satanic.

Rhythm guitars are a mixture of slow depressive riffs in some parts and fast black metal riffing that uses a lot of tremolo picking in most parts while the lead guitars have a noisy tone that utilizes some melody and not much in the way of guitar solos.

Vocals are a mixture of high pitched black metal screams mixed with some blackened death metal growls, while the lyrics not on hatred as well as some anti christian/satanic themes, as for the production on this album which was recorded and mixed during MMVII in Brugga Studios by Celestial Bloodshed and A. Delen as well as being mastered by T Stierna sounds somewhat professional without losing the raw black metal feel.

In My opinion this is a really good album and Celestial Bloodshed are a great band, this is probably not the best black metal album recorded but it is still good and worth buying. Fans of raw satanic black metal will not be disappointed.

STANDOUT TRACKS INCLUDE "Sign OF The Zodiac" "All Praise To Thee" and "Gospel Of Hate". RECOMMENDED BUY

Bandcamp
Posted by OccultBlackMetal at 4:50 PM