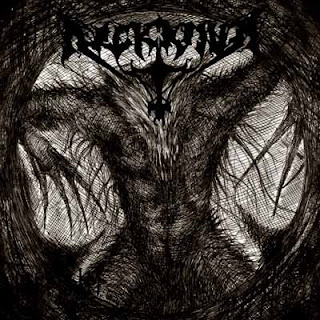 Arckanum are a band from Sweden that has been around since this 90's which I would describe as Anti Cosmic Chaos Gnostic black metal and this is a review of their 2009 album which was released by Moribund Records under exclusive pact with Debemur Morti Productions.

Drums range from slow to mid paced parts to some very fast blast beats, while the bass playing sounds very dark with some lead bass and you can actually hear the instrument on some of the songs that are presented on this album.

Rhythm guitars are very fast, raw and primal black metal riffs that contain some melody and on some songs there are palm muted riffs that seem to be heavily thrash influenced as well as some slower riffs that have a depressive feeling to them, while the lead guitars are very melodic with some of the slower leads containing a distorted feel and the guitar solos have a very professional sound.

Vocals are mostly high pitched black metal scrams that have a style of their own as well as some spoken word ritualistic parts while the lyrics which are written in Swedish as well as old Icelandic probably cover true Satanic themes as well as Norse religion in the form of Loki worship and Chaos Gnosticism and the songwriter also writes books that are published on IAXXAR, as for the production on this album it sounds very professional and you can hear all of the musical instruments, while keeping the raw black metal feel.

In my opinion this is a very very good album and if you are a fan of Arckanum you will not be disappointed.