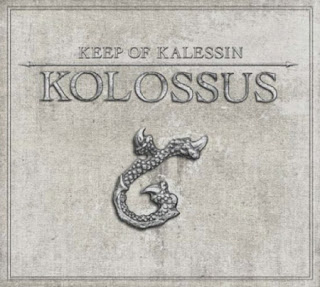 Keep Of Kalessin  are a band from Norway that has been around since the 90's and started out as pure black metal in the Norwegian vein but have evolved into more of a mixture of black, death, and thrash with recent recordings and this is a review of their 2008 album "Kolossus" which was released by Nuclear Blast Records in the United States and Indie Recordings in Norway.

Drums on this recording range from slow technical parts to some fast blast beats that utilize influences from the many different genres of metal, while the bass playing is all rhythm bass and follows the riffs coming out of the guitars and on one of the songs I could hear a violins well as a piano.

Rhythm guitars contain a lot of melody and there is a mixture of fast and slow riffs that mix thrash with black metal and some classic metal, while the lead guitars use a lot of melodic guitar solos that have classic metal influences, as for the acoustic guitars when they are used they sound very dark and utilize a lot of full chords and there is an occasional use of a classic guitar being used with some middle eastern scales that are finger picked.

Vocals have a thrash influenced black metal feel with some deep death metal growling and at times they are clean singing vocals being utilized that have some power/speed metal influences, while the production on this recording which was recorded at Morningstar Studio during Nov 07 through Jan 2008 sounds very professional and you can hear all of the musical instruments that are on this album.

Lyrics are mostly sci fi and fantasy topics with referenced to fictional gods, while the artwork on the album is a blade that kind of looks like a cross  between a snake or a dragon.

In my opinion this is a good album and while at times it has some of the modern elements that I don't like that much in newer metal there are still enough classic metal influences to keep me interest, if you are a fan of their earlier stuff which was a lot more black metal you will be disappointed and call this band sellouts, but if you are an open minded fan of extreme metal you will enjoy this opinion.

STANDOUT TRACKS INCLUDE "The Rising SUn" "Warmonger" "The Mark Of Power" and "Ascendent", in addition my cd came with a bonus dvd. RECOMMENDED  BUY.

Posted by OccultBlackMetal at 9:23 PM