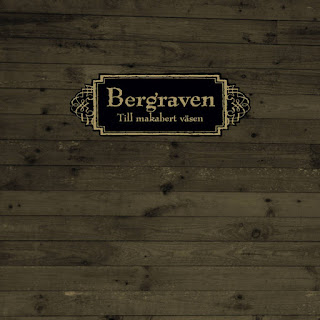 Bergraven are a band from Sweden that plays a very original form of black metal and this is a review of their 2009 album "Till makebert vasen" which was released by HydraHead Records.

Drums are mostly slow to mid paced on this album with not much in the way of fast playing or blast beats except for maybe a few songs, while the bass playing takes influences from many different styles of music and plays the role of a lead bass and is one of the most dominant instruments on this album.

Rhythm guitars are mostly slow doomy black metal riffing with some mid paced to fast playing mixed in the music while the guitar leads are very distorted as well as progressive with some slide guitar playing mixed in that gives the music a very ambient/new age feel that utilizes many different musical styles, as for the acoustic guitar when it is utilized it sounds very dark and tragic with full chords being utilized.

Vocals are mostly high pitched black metal screams with some clean singing that has an avant garde feel and some occasional whispered vocals, while the production which was recorded at Necrmobus Studios in Stockholm, Sweden sounds very professional and you can hear every instrument on this album, as for the lyrics they are all in Swedish but probably cover depressing topics since this band has been labeled a Shining rip off but yet sounds nothing like them as on this album.

In my personal opinion this is a good album from a very talented band that sounds very original and progressive, if you are a fan of progressive and experimental dark/black metal you should get this album for your collection, you will not be disappointed.  RECOMMENDED  BUY.

Posted by OccultBlackMetal at 8:01 PM