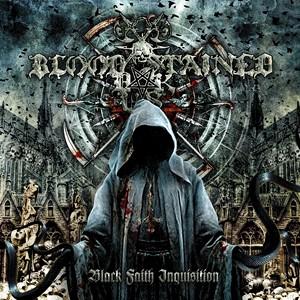 Blood Stained Dusk are a band from the Southern state of Alabama that has been around since the mid 90's and are one of the best known bands in the United States black metal scene which I would describe as dark satanic, occultic atmospheric black metal and this is a review of their 2008 album "Black Faith Inquisition' which was released by Moribund Records during the year of 2008.

Drums range from being very slow to some fast and brutal blast beats, while the bass playing is all rhythm bass, as for the keyboards they sound very dark, symphonic and atmospheric with the feeling of an epic movie soundtrack with a very ritualistic sound.

Rhythm guitars sound very melodic with some fast black metal riffs while the lead guitars have a lot of melody as well as feeling in the guitar solos,

Vocals are mostly high pitched black metal screams with some clean vocals that sound very operatic as well as avant garde sounding and at times there are spoken word parts that call up the dark lord as well as the occasional deep death metal growl.

Production on this album which was produced , mixed and engineered as well as mastered by Lance Waight and Blood Stained Dusk under a full moon during Sept 2008 sounds very professional and you can hear all of the musical instruments being presented on this album.

Lyrics on this album cover some Necronomicon, Sumerian, Satanic and Anti Christian topics that seem to be well written by someone who is educated in the knowledge of the black arts, while the artwork on the cover has a Satanic Priest with serpents as arms in front of a gothic looking cathedral with the band logo on the top looks very professional and the artwork is very detailed.

In my opinion this is a very good album and while it is more symphonic than their earlier material this album is still a masterpiece and prove on why Blood Stained Dusk are one of the leading back metal bands in North America. If you are a fan of atmospheric satanic black metal you will not be dissapointed.

STANDOUT TRACKS INCLUDE "Coven Of The Dying Sun" "Eve Of Maelstrom" and "Ashes From A Burning Heaven". RECOMMENDED BUY

Posted by OccultBlackMetal at 8:00 PM