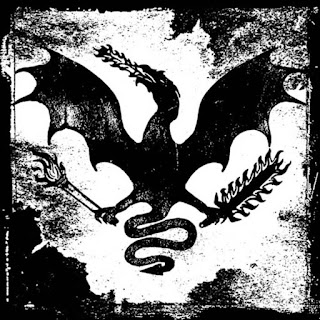 Arckanum are a band from Sweden that has been around for 2 decades that plays Anti Cosmic Chaos Gnostic black metal, who has also had their current album reviewed by this zine and this is a review of their 2008 comeback album "Antikosmos" which was released by Moribund Records under exclusive pact with Debemur Morti Productions.

Drums range from slow to mid paced parts mixed in with some very brutal blast beats, while the bass playing is mixed down low on the mix and seems to follow the riffs coming out of the guitars, however they fixed the problem on their new album, and on some songs there are effects that remind me of noise music.

Rhythm guitars are mostly fast, raw and primal black metal riffing with some melody as well as some palm muting that gives the music a thrash feel and some slow parts that have a depressing and a doomy feel to them, and unlike the new album there are little or no guitar leads except for a few songs and they have a slow and melodic feel to them mixed in with a weird distorted sound.

Vocals are mostly high pitched black metal screams that standout and cannot be compared to anybody else with some spoken word ritualistic parts, while the lyrics which are written in Swedish as well as old Icelandic, are about Satanic, Ghaos Gnosticism as well as Loki worship and the dark side of the runes, as for the production on this album which was recorded and mixed by Tomas Skogsberg in Sunlight Studio from the 18th to the 25th of February 2008 with the production being handled by Shamaatae sounds very raw and primal with a professional feel.

In my opinion this was a good comeback album for Arckanum and while I cannot tell if I like this one or the new one better, this is still a really great album and fans of Arckanum would not be disappointed.

Posted by OccultBlackMetal at 5:46 PM