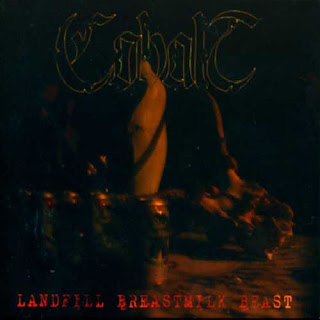 Cobalt are a 2 piece band from Greeley, Colorado that started out as a war metal band that has evolved more into an experimental black metal band with this release and this is a review of their 2008 ep "Landfill Breastmilk Beast" which was released by Profound Lore Records during the year of 2008 a few months before the releases of their newest full length "Gin" which I have not heard yet.

Drums on this recording are mostly slow beats with some occasional fast blast beats while the bass playing has a very heavy sound that is mostly slow and you can actually hear it on this recording, and on the last song there are a lot of effects in the ambient noise vein that sounds very ritualistic as well as nature orientated.

Rhythm guitars are mostly slow with a lot of noise and distortion that has influences from noise rock, crust, sludge and black metal, while the guitar leads are noisy and chaotic with some primitive sounding guitar solos, while the acoustic guitars use full chords and contain a very dark feel that has a lot of sorrow and depression.

Vocals are mostly high pitched black metal screams with some deep death metal growls and some spoken word samples, while the lyrics are kind off ritualistic with a touch of philosophy, as for the production on this ep which was recorded at Flatline Audio in Denver, Colorado with Dave Otero sounds very professional and you can hear all of the instruments.

Cover art on this album kind of has an artistic feel to it but it it is ruined by having cans of Pabst Blue Ribbon on it which looks all white trash and backwoods American redneck, and I would say that it is the most pathetic black metal album cover I have ever seen.

In my opinion this is an ok recording, even though I preferred their earlier material, if you like experimental black metal you might like this ep, and while I cannot agree with some of the band members views on a lot of things, I feel they are a talented band and this is a good release.  RECOMMENDED  TRACK "Ritual  use  of  Fire".  RECOMMENDED  BUY.

Posted by OccultBlackMetal at 6:31 PM