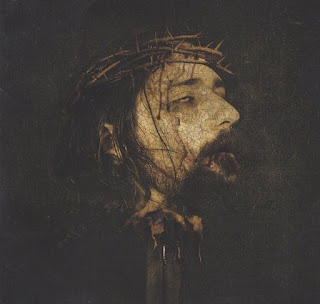 Kult Of Azazel are a band from Florida that has been around for more than a decade and are one of the best known U.S black metal bands and this is a a review of their 2009 album "Destroying The Sacred" which was released on Artic Music Group.

Drums are mostly fast with a lot of blast beats that sound very brutal while the bass guitar follows the riffs coming from the guitars   with on bass leads being utilized and is mixed down low in the mix except for the last song which is a cover of some old 80's hardcore punk song.

Vocals are mostly high pitched black metal screams mixed in with some deep death metal growls, while the lyrics are very anti Christian, Jewish, Muslim as well as hatred for other forms of Abrahamic religions mixed in with some Satanic topics, as for the production which was recorded at Mana Studios in St. Petersburg, Florida and Produced by Brian Elliott and Kult Of Azazel sounds very professional and you can hear all of the musical instruments.

In my opinion this is probably not the best album this band has not put out since it adds nothing new to the table but it is still a good album and fans of fast and brutal black metal with a death metal edge wont be disappointed.

Posted by OccultBlackMetal at 5:40 PM