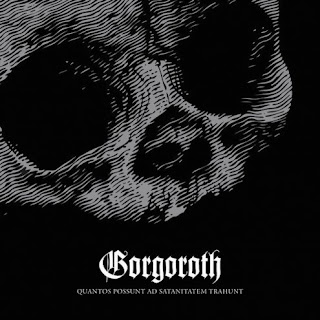 Gorgoroth are a band from Norway that has been around for 2 decades and is a very influential Norwegian black metal bands with band members that have spent time in jail and have had some live performances that have shocked Xians and Catholics worldwide, this is a review of their new album with a different line up than previous releases "Quantos Possunt Ad Satanitatem Trahaunt" which was released by Regain Records in the year of 2009.

Drums sound very professional with some blast beats mixed with some slow to mid paced parts that seem to be influenced by many different styles of metal while the bass playing which was done by Doddel aka Frank Watkins known best known for his performances with legendary death metal band Obituary is his most primal to date that has a dark sound that is all rhythm bass.

Rhythm guitars contain a lot of diversity with a mixture of slow depressive to fast black metal riffing that also contains a lot of thrash and traditional metal influences while the lead guitars use alot of melody and there is not that many guitar solos.

Vocals are mostly high pitched black metal screams with some occasional clean singing while the production which was recorded in Monolith Studio, Mastered by Infernus, Asklund and Mats Lindford at Cutting Room that was produced by Infernus and Tomas Asklund who also did the Engineering and Mixing sounds very professional and you can hear all of the instruments, as for the artwork it is all black and white with a skull on the cover. Lyrics are mostly about Satanism mixed with some Greek Mythology as well as Nietzsche style of philosophy.

In my opinion this is a good comeback album fro Gorgoroth and while it is probably not their heaviest or best this is still a worthwhile record that does not dissapoint and does not fall in the sellout category, but I will admit this cd had to grow on me.

Posted by OccultBlackMetal at 5:58 PM