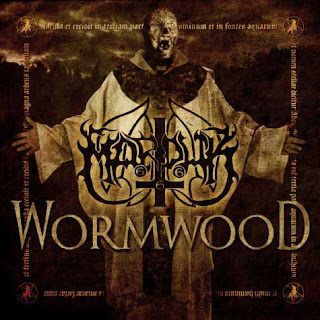 Marduk are a legendary Swedish black metal band that has been around since the early 90's, put out plenty of albums, tour the world and influenced many black metal bands and this is a review of their 2009 album "Wormwood".

Drums on this album range from some slow technical parts that turn into really fast brutal blast beats which seem to be the band's trademark, while the keyboards when they are utilized are very dark and psychedelic sounding and like most Marduk albums there are not many keyboards being used.

Bass playing on this album sounds really professional with some bass leads and the tone is real dark sounding but very easy to hear and you can also hear some parts that follow the rhythms that are coming out of the guitars with a very evil psychedelic feel.

Rythym guitars use many different styles of riffs ranging from slow, mid paced to fast, if you expect another fast Marduk album you wont find it, but there are still some very fast songs on this album and the music is still really heavy, as for the guitar solos when they are utilized they are very fast and melodic in the Swedish vein and they have a very professional sound.

Vocals are very dark sounding with some distorted growls that have a death metal edge and there are also a lot of high pitched black metal screams as well, while the lyrics are very dark and cover a very orthodox type of Satanism that does not overuse the devils name and anti christian themes which is a big change for this band since they are known for some very heavy Christ bashing music, and one song was written by M. Belfagor from the band Ofermod and he brought in his touch of the dark side of the Caballa known as the Qliphoth and you can tell the lyrics have some inspiration from Aliester Crowley.

Production on this album which was recorded at the Endarker Studio in the Year of the Lord 2009 sounds very professional for this kind of music and every instrument including the bass can be heard on this recording, some black metal elitists might be disappointed but fans of this band as well as other known Swedish bands will be happy.

In my opinion this is a good album from Marduk and while it is experimental it is nothing like the last album and it seems like they regained a lot of their heaviness and evil edge which was kind of missing on the last release, this is probably not as fast as Panzer Division Marduk and I don't think they want to make another album like that since they feel they would be repeating themselves. If you are a fan of Marduk from the early 2000's material you will not be disappointed and I would advise picking up this album as soon as you can.

Posted by OccultBlackMetal at 5:15 PM