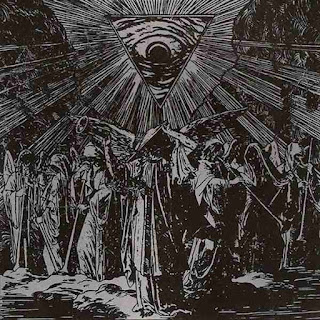 Watain are a band from Sweden that plays a raw yet melodic form of true satanic black metal and this is a review of their second album which was originally released in 2003 by a different label and re-issued by Season Of Mist in the year of 2008 "Casus Luciferi".

Drums use a mixture of slow to mid paced rhythms and then they turn into some very brutal blast beats, while the bass playing has a dark tone and follows the riffs coming out of the guitars with some lead bass and you can actually hear it on parts of this recording.

Rhythm guitars are very raw and primitive with a lot of fast black metal riffs that utilize a very dark sounding melody and on some songs to slow down to almost a doomy pace without being doom metal but still having a dark and depressing sound, while the lead guitars are very melodic sounding without using that many guitar solos but when they are used they are very fast bringing a lot of chaos into the music.

Vocals are mostly high pitched black metal screams with some deep growls on the bonus track while the lyrics cover a Gnostic/cabalistic style of Satan Worship as well as Luciferian philosophies that are very ritualistic and anti judeo christian with some contributions by members of the bands Funeral Mist, Antaeus and Katharsis, as for the production it sounds very professional and you can hear all of the musical instruments but it still retains the raw black metal feel.

In my opinion this was a very good album from Watain and it is a shame I could not find this album anywhere when it came out but thinks to Season Of Mist, I finally got to hear and add this masterpiece to my music collection.

STANDOUT TRACKS INCLUDE "Opus Dei(THE Morbid Angel)" "Puzzles Of Flesh" "from The Pulpits Of Abomination" and "Waitan" which is a cover of an old VON song and a bonus track on this re-issue. RECOMMENDED BUY

Posted by OccultBlackMetal at 8:48 PM