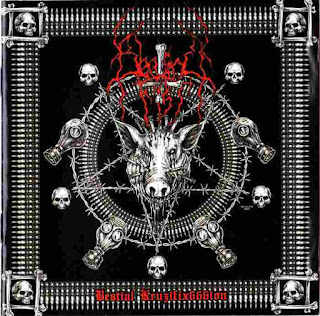 Bleeding Fist are a band from Slovenia that plays a form of war metal which mixes the fastest and heaviest forms of black, death, and thrash metal together and this is a review of their 2009 album "Bestial Kruzifix666ion".

Drums on this recording are very fast and brutal with a lot of blast beats, while the bass guitar follows the riffs coming out of the guitars.

Rhythm guitars are very raw sounding with some fast riffs that mix black metal and 80's underground Brazilian metal together in a more modern way with some occasional slow riffs but not that much while the lead guitars are very noisy and chaotic with some slow melodic solos that utilize a middle eastern scale on one song.

Vocals are mostly high pitched black metal growls mixed with some death vomit style growls, while the production which was recorded in Studio Panorama on 20/12/08 entirely in 8 hours with the production done by Marko Gigon and Bleeding Fist is very raw sounding and I have not seen an album recorded that fast in 20 years.

Lyrics on this album cover a variety of topics such as pain, Rituals, Occultism, Black Magick,Anti Christian, Left Hand Path and all out Chaos, while the cover which was done by Sickness666 contains the band's logos that also has a pentagram with a pig's head in it, and some of the other parts remind of a Revenge (Can) cover, looks very professional and it makes it an extra bonus to buy an album that has a kick ass cover as well as music.

In my opinion this is a good album and this is probably one of the most underground sounding albums that I have ever heard On Moribund Records. If you are a fan war/black/death/thrash metal you will not be disappointed when you purchase this album.

STANDOUT TRACKS INCLUDE "Spirit, Dust And Magic" "Celebration Of The Third" "Black Magic Book" and "MOrphengenesis Of The Holcaust". RECOMMENDED BUY.