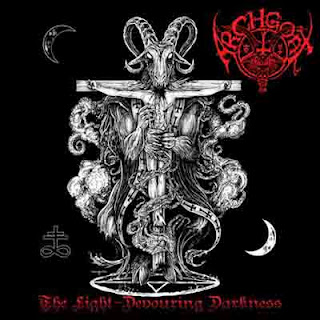 Archgoat are a legendary black metal band from Finland that has been around since 1989 and helped create or pioneer a style of blackened death metal known as Goat Metal and this is a review of their 2009 album "The Light-Devouring Darkness which was released by Moribund Records under exclusive pact with Blasphemous Underground Productions.

Drums are very brutal with slow slow beats that turn into some very brutal blast beats while the bass playing follows the riffs of the guitars and is mixed down low in the mix.

Guitars contain some very fast primal black metal riffs mixed with some slow heavy stuff that has a heavy death metal influence and there are no lead guitars contained on this recording.

Vocals are mostly deep growls with some Satanic chanting mixed in, while the lyrics cover a very dark form of Satanism with Luciferian overtones that also have a lot of blasphemy and Anti Christian topics as well, as for the production it is very raw and primal which I am sure that is what the band wanted.

In my opinion this is a very good album that sounds as good as the stuff they did in the 90's but with a lot more heaviness, if you are a fan of Archgoat and all the other true Satanic black metal bands from the 90's.

Standout tracks include "Apotheosis Of Lucifer" "Goat and The Moon" "The Light-Devouring Darkness" and "Fornicated Messiah". RECOMMENDED BUY

Posted by OccultBlackMetal at 7:46 PM