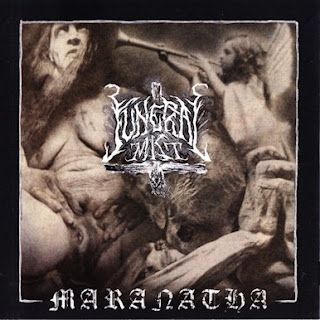 Funeral Mist are a black metal band from Sweden that I would describe as raw Satanic religious black metal and is the main project of Mortuus better known as the lead singer of Marduk and this is a review of their 2009 album "Maranatha" which was released in 2009.

Drums on this album are mostly fast blast beats with some occasional slow to mid paced drumming while the bass playing is all dark and primitive sounding which gives the music a very heavy edge.

Rhythm guitars on this cd cover plenty of ground with some slow to mid paced riffing that has a very occultic feel with some fast black metal riffing while the lead guitars sound very distorted with little or no guitar solos.

Vocals are in the high pitched black metal scream vein with some distorted vocals that sound deep and at times the singer sounds like he is getting strangled to death with some occasional clean vocals mixed with female operatic vocals that are sound by a choir, at times there  are spoken word parts that sound like Pat Robertson losing his mind, while the production sounds very professional but yet still raw in a non commercial vein captures all the sounds of the instruments, as for the lyrics to cover a biblical version of Satanism that is very Orthodox and satanic which seems to be the style in Sweden nowadays.

In my opinion this is a good album from Funeral Mist and if you are a fan of Unorthodox Satanic Occultic black metal you will not be disappointed.

Posted by OccultBlackMetal at 9:06 PM