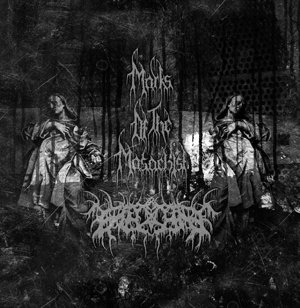 This is a split album between Marks Of The Masochist who have members from both Colorado and Virginia, while Enecare who is a one man project hailing from Ireland and we will start this review by reviewing Marks Of the Masochist first which I would describe as depressive black metal.

Drums are slow on some songs and then they turn into some brutal blast beats when the music speed's up, while the bass playing sounds very powerful with a lot of emotion and you can actually hear it on the recording, as for the synth which was only at the end of the last song it has a very dark avant garde ambient feel.

Rhythm guitars are mostly slow to mid paced raw black metal riffs with some fast parts while the guitar leads are very melodic in a more suicidal underground way and it brings a very  haunting sound to the music and there is an occasional acoustic guitar parts that utilizes a lot of finger picking.

Vocals are mostly high pitched black metal screams that sound like the singer is cutting himself and is in a lot of pain, while the lyrics deal mostly with pain, hate and depression, as for the production it sounds very dark and raw.

In my opinion Marks Of The Mascochist are a very good band and fans of depressive black metal will not be disappointed with their songs on this split.

STANDOUT TRACKS from Marks Of The Masochist include "Burn Out My Eyes Burn Out My Tongue" "Rampant And Miserable" and "Confused Ramblings Of The Divine".

Now here is a review of the second band on the slit. Enecare play a form of hateful, raw, and satanic black metal and are probably the heaviest band on the split.

Drums are mostly slow with some blast beats on the faster songs, while the bass playing is mixed down low in the mix and follows the riffs coming out of the guitars.

Rhythm guitars are very raw depressive slow to mid paced black metal riffs that contain some melody as well as alot  of distortion and feedback with some very fast riffing on some songs and there is not much in the way of lead guitars or guitar solos.

Vocals are mostly high pitched black metal screams with some deeper screams on one song with only a minor amount of growls, while the lyrics cover some satanic topics as well as  a lot of hatred and depression, as for the production it is very dark and raw in true black metal style and there  was a couple of technical problems on a couple of songs.

In my opinion Enecare are a very good band and while they might not be as talented as Marks Of The Masochist they make it up by being heavier, I see this band appealing to fans of dsbm and ambient black metal

STANDOUT tracks from Enecare inlude "Gospel of Disease" "As Voice Lies Torture" "Thy Reign Descend" which is a Perversion cover "Devouring The Moon" and "The Sword That Splits The Sky". RECOMMENDED BUY.

Posted by OccultBlackMetal at 7:03 PM