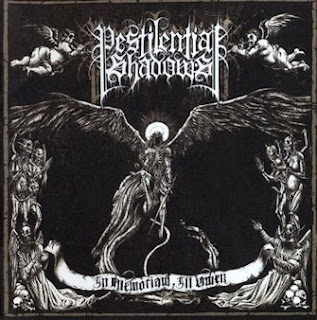 Pestilential Shadows are a band from Australia that plays a style of music that I would describe as raw primal black metal with a melodic edge that they describe as Anti Human Plague Black Metal and this is a review of their 2009 album which was released by Pulverized Records "in Memoriam Ill Omen".

Drums range from being mid paced to fast with some blast beats while the bass playing sounds very dark and is all rhythm bass with a tone that is kind of buried in the mix but can actually be heard on a few songs, keyboards when they are incorporated sound very dark and have a gothic horror feel not to be confused with gothic rock, what I am describing is more of a classic black and white horror film type of feel.

Rhythm guitars contain a lot of variety with some mid paced to fast primal black metal riffing mixed with some slow depressive riffs that sound tragic with some drones and doom influences that utilizes some of the heaviest palm muting I have ever heard and there are some ocassional mellow parts that contain some dark ambiance, while the guitar leads are very distorted with alot of melody that reminds me of some Orthodox Satanic Swedish black metal bands.

Vocals are mostly high pitched black metal screams that at times sounds like the singer is in agony with some occasional deep growls while the production which was recorded at Scourge Studio in 2007, Engineered and mixed by Balaam and Mastered by D. Baackovic sounds very professional for this kind of music without sounding commercial, as for the lyrics they reflect a biblical form of Satanism without overusing the devil's name mixed with some hateful and depressing type of subjects.

Artwork on this recording which was designed by Balam is in all black and white shows a mixture of angels and devils with the angels decaying and bleeding which kind of reminds me of epic poems such as Paradise Lost by John Milton and The Divine Comedy by Dante.

In my opinion this is a very good album and I think this record will be a worthy addition to any true black metal fan's music collection.

Standout tracks include "weapon Against The Sun "Of Loss And Suffering Inherit" "For Man And Heavens Ruin" and "Sundered". RECOMMENDED BUY.

Posted by OccultBlackMetal at 5:09 PM